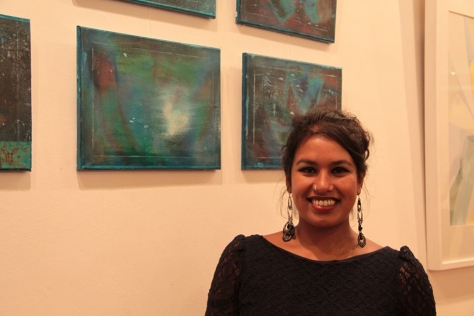 A Manchester Metropolitan University art alumna has had a brush with fame as a mentor on the new BBC television programme The Big Painting Challenge.
Artist Diana Ali, who studied a course in Foundation Art and Design at the University, became a professional mentor on the show after her work impressed a BBC producer who had been following her career.
Delighted to have been selected, she said: “I’ve curated nationally and internationally, lectured and mentored artists in the past and have really been an active artist since my foundation course in 1998 so being chosen as a mentor for the show was a huge compliment.”
Over the course of the show, Diana helped coach five passionate amateur painters through an intensive, six-week artistic boot camp to help them perfect their skills. Each week saw different challenges and eliminations, with the contestants painting still life, landscape, animals and portraits.
The winner, Suman Kaur, was announced in the final episode last week where the four remaining artists faced increasingly difficult challenges, including painting from a boat on the River Thames.
On her time at the University, Diana said: “I can honestly say that doing my foundation course was the best year in my arts education. With fantastic lecturers, it made me confirm that I wanted to be an artist. I met so many like-minded peers and lecturers who were approachable and my time there taught me how to be open-minded, ambitious and develop my artwork to a higher level. After the foundation course, I went on to do a degree in Fine Art and a Masters in Contemporary Fine Art with a strand in curating.”
With a passion for meeting new people and networking with other artists and community groups, Diana also holds professional practice talks at different universities to teach students how to be an artist in the art world.
As a visual artist, Diana added: “Inspirations behind my work change every time I am confronted with different challenges in life but I also celebrate them – from being from a Bengali background, to being made redundant, to loss, to meeting people and being interested in cross-cultural people while traveling.
“It has been a pleasure to have an on-going passion, love hard work and enjoy what I do in art. I believe that our voices can come through in the art we produce.”