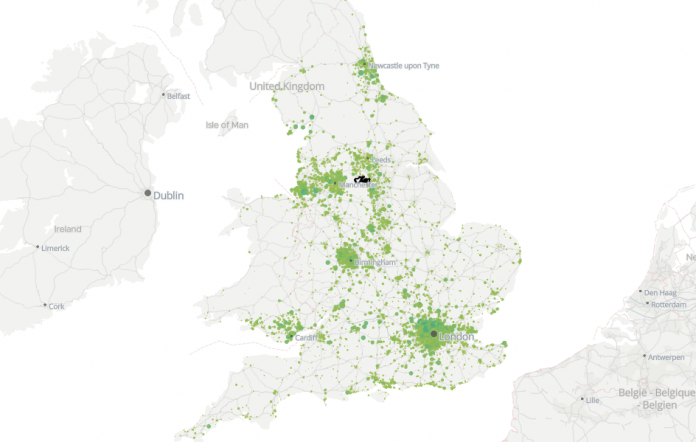 Residents in deprived areas have experienced double the death rates of those in affluent areas, new figures from the Office for National Statistics reveal this morning.

London had the highest age-standardised mortality rate with 85.7 deaths per 100,000 persons involving COVID-19, this says the ONS was statistically significantly higher than any other region and almost double the next highest rate of 43.2 deaths per 100,000 population found in the West Midlands and 42.5 in the North West of England.

The highest rates of deaths involving COVID-19 were in London. Rates were also high in the major cities of Liverpool, Birmingham and Manchester.

“By mid-April, the region with the highest proportion of deaths involving COVID-19 was London, with the virus being involved in more than 4 in 10 deaths since the start of March. In contrast, the region with the lowest proportion of COVID-19 deaths was the South West, which saw just over 1 in 10 deaths involving coronavirus. The 11 local authorities with the highest mortality rates were all London boroughs, with Newham, Brent and Hackney suffering the highest rates of COVID-19 related deaths.” said Nick Stripe, Head of Health Analysis, Office for National Statistics adding that

“As a country we believe in protecting each other from harm, and this is especially apparent when we see people willingly disrupting their lives to abide by the current restrictions. But even before coronavirus there were signs that our record on tackling poverty and health inequalities was unravelling. It can never be right that someone’s life chances are so profoundly affected by where they live or how much money their family has.

“It’s crucial that all aspects of the spread of this virus are carefully examined, but we know that people in more deprived areas are less likely to have jobs where they can work from home. This means they may have to face a very significant drop in income or keep going to work, facing greater risks of catching virus. They are also more likely to live in overcrowded homes, increasing the risk for whole families. This just is not right.

“As well as dealing with the current crisis, it is vital to break the grip of poverty on the health of the nation in the long term. This means rethinking how we treat the lowest paid members of our society who have sustained us and kept us safe during this crisis. By doing so, we can help end the spiral of low income and poor health which may have had especially tragic consequences during this pandemic.”

86% of people who tested positive for Covid-19 during lockdown did not have virus...