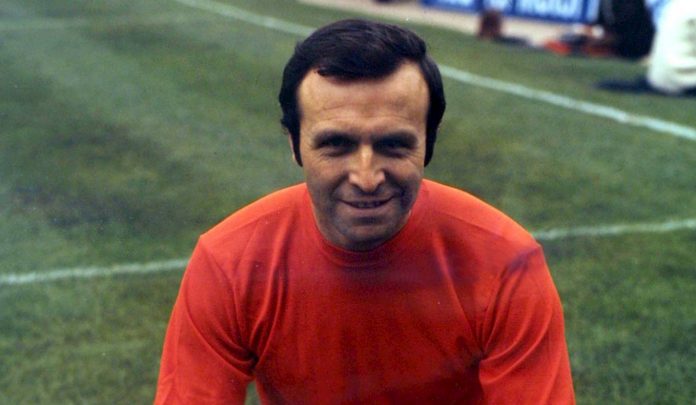 Denton born Jimmy Armfield has died of cancer at the age of eight two.

The former Blackpool captain who played for the club for seventeen years  was also capped forty three times for England, with fifteen of those international appearances as captain.

Jimmy moved to Blackpool from Denton with his family at an early age and was spotted playing in a practice match by then-manager Joe Smith. He impressed on the left wing and scored all the goals in a 4-1 victory.

Despite that, it was as a right-back where he made his name. Widely regarded as the first overlapping full-back, he made his Blackpool debut against Portsmouth in 1954 and spent many years playing behind another club legend and England great, Sir Stanley Matthews.

Voted Young Player of the Year in 1959, Jimmy was heralded as the best right-back in the world following the 1962 World Cup in Chile, and narrowly missed out on the FWA Player of the Year Award to his good friend and England team-mate Sir Bobby Charlton in 1966.

That same year, he was one of two Blackpool players – Alan Ball being the other – to be named in England’s 1966 World Cup winning squad, yet missed out on an appearance at the tournament due to injury. He received a winners’ medal from FIFA 43 years later.

A year after leading Blackpool back to Division One, his final game for the club came against Manchester United in 1971, and was followed by stints in management with Bolton Wanderers and Leeds United.

While in charge of Bolton, he steered the club to the old Second Division as Third Division champions, prior to replacing Brian Clough at Elland Road and taking Leeds to the European Cup final in 1975.

Jimmy was made a freeman of Blackpool in 2003 and later awarded an Outstanding Contribution honour at The Football League Awards in 2008, as well as a PFA Merit Award. He was also named a CBE on the New Year’s Honours List in December 2009 for his services to the Lancashire community.