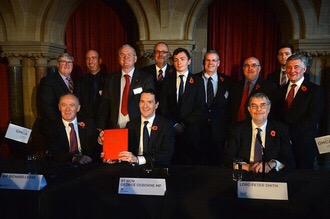 In partnership with Guardian Live, Discuss starts the year on one of its favourite themes: debating the democratic participation of the people of Greater Manchester in Devo Manc.
While the debate about decentralising powers from Westminster is a longstanding one and there is genuine enthusiasm about devolution, the development of the deal has attracted criticism. The agreement, it is argued, was negotiated behind closed doors without creating any space for participation and was imposed on the people of Greater Manchester.

On the other hand, an elected government with a manifesto pledge to introduce elected Mayors for Cities did a deal with the ten Greater Manchester leaders each of whom was democratically elected and entered the deal acting in the best interests of the residents and businesses.

Sir Richard Leese argues because the Combined Authority is an evolution of our existing arrangements a referendum is not needed. The Mayor of Salford Ian Stewart, another signatory to the deal, disagrees saying it is people’s ‘democratic right’ to have their say on how Greater Manchester will be governed with Salford Council voting in favour or a motion calling for residents to have their say.
So who is right and who is wrong?