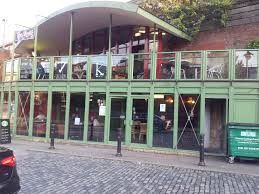 CAMRA, The Campaign For Real Ale has revealed the winners in their Pub & Club awards in the Trafford & Hulme branch area.

The top accolade of Pub Of The Year has been awarded to The Knott on Deansgate, Manchester. Nestled in the railway arches opposite Deansgate railway station, this is the third time the Castlefield bar has taken the top title having won it in both 2009 & 2010 – the latter being on the way to being named Greater Manchester Pub Of the Year in 2010.

The Club Of The Year has been named as Flixton Conservative Club while cider & perry lovers will want to head to Cider Pub Of The Year, The Font on Manchester Road, Chorlton.

The Knott has been a haven for beer fans in the city for over 10 years, leading the way for what has become known as the Craft Beer Revolution. With a selection of 7 cask ales, a wide range of European lagers, craft beers from the UK & abroad and an enviable selection of bottles from around the world, there is no better place in the city for the modern beer lover.

The bar supports a wide range of local breweries with long established favourites like Marble Beers and Rochdale’s Pictish Brewery sharing bar space with some of the most exciting new local breweries like Shindigger and Brewsmith. Add a warm welcome, efficient service and freshly cooked restaurant quality food at pub prices, the bar offers the complete package.

Pipped to the post to end up as runner up was Altrincham’s Costello’s Bar,the brewery tap of Dunham Massey Brewing Co, themselves a former winner having taken the title in 2011 & 2012. Chorlton’s The Beech Inn was third.

John O’Donnell, spokesman for Trafford & Hulme CAMRA said “We are very pleased that The Knott has regained the Pub Of The Year title – they have long been one of the very best pubs across the area and have been in the running for the award year on year. Ahead of their time when they opened, they have kept moving as the city’s beer market has evolved, offering craft beers long before others caught on but all on the solid foundations of well kept real ale.”

Alongside the Pub Of The Year announcement, the branch has also confirmed their Club Of The Year award has gone to Flixton Conservative Club for the third year in a row. The private members club on Flixton Road has cemented a considerable reputation for choice and quality of its real ales under the stewardship of Nigel & Sharon Porter, a feature which has helped the club grow its membership and customer base at a time when other clubs are struggling.

Finally, the Cider Pub Of The Year is The Font on Manchester Road Chorlton-cum-Hardy, recognised for offering four traditional ciders & perries on draught at all times alongside the widest range of bottled ciders that you will find anywhere in the city. The award marks the third time in a row that the Font chain has taken this title, with their Manchester bar winning it in 2013 before conceding to their younger Chorlton based sister bar for 2014.