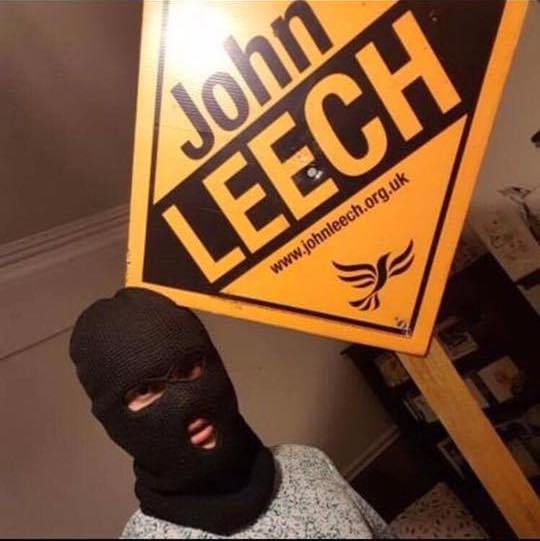 Lib Dem campaigners in Manchester’s Withington constituency have claimed that Labour Party activists have been driving around the constituency stealing from people’s property in black balaclavas.

Avcording to their press office,

“Incredibly the thugs boasted of the events posting selfies with the garden boards they had stolen and wearing the balaclavas. They later posted pictures of themselves stuffing letters for Labour leader Jeremy Corbyn, with one claiming it was “the Lord’s work”.

The gang spoke online about where they were going to target next and discussed which Liberal Democrat garden posters they could steal next.”

Withington’s former Liberal Democrat MP, John Leech, said: “We have posters nicked and lost in every election – that is not the problem here – but to dress up in balaclavas, driving around at night and stealing from people’s property, at any time, let alone just days after the horrific events in Manchester is just sickening and utterly vile.

“A number of local residents have contacted me absolutely terrified after being woken up in the early hours to see a group of thugs in balaclavas on their property – it’s completely unacceptable.”

On Friday, one resident, a young mum who was looking after her son who was struggling to sleep, reported being verbally attacked when she went to investigate what was going on. The thugs screamed “student c***” at her before running off.

John Leech’s election agent confirmed it had been reported to Greater Manchester Police.

Sing as you go on the Gracie Tram