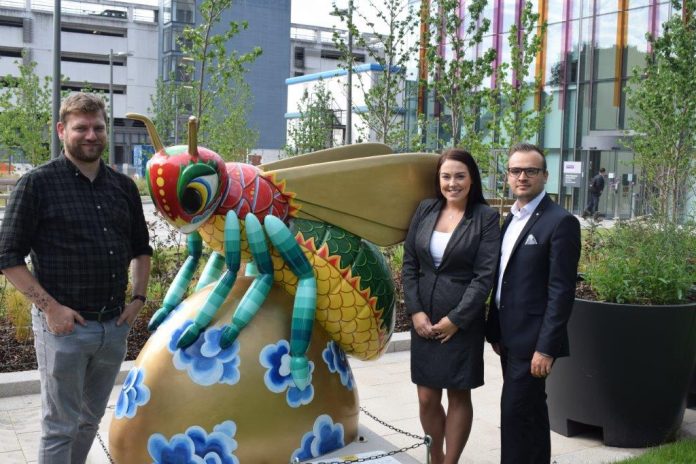 The dual-branded Crowne Plaza and Staybridge Suites Manchester – Oxford Road, known as The Lume and set to open in the coming weeks, has unveiled its design and artist for the spectacular Bee in the City public art event.

Visitors to Manchester, residents and families are expected to flock to see ‘Beejing’ from this week onwards while guests will get chance to take selfies in front of the 6ft bee when the dual-branded hotel opens to the public in September.

Artist Jessica Perrin designed ‘Beejing’, completing the sculpture during a nine-day visit to the city earlier this summer.

The art piece is one of more than 100 individually designed giant bee sculptures that will go on show across Manchester during what is shaping up to be the biggest, most spectacular, mass participation public art event in the city’s history.

Andrew Fletcher, General Manager of the dual-branded hotel, said: “Crowne Plaza and Staybridge Suites Manchester – Oxford Road is delighted to be throwing its weight behind what is a fantastic initiative that celebrates communities and togetherness.

“We simply cannot wait for everyone to see ‘Beejing’ as we know there’s going to be so much love for this magnificently designed six-foot sculpture.”

He added: “As a first of its kind hotel in the heart of the Oxford Road Corridor and within walking distance of the city centre we jumped at the opportunity to become involved with Bee in the City.

“The trail is a nod to Manchester’s industrious and collaborative strengths and is a fantastic demonstration of creative talent that will be enjoyed by families and many people who flock to see ‘Beejing’ and the other sculptures.

“It’s also a perfect way for Crowne Plaza and Staybridge Suites Manchester – Oxford Road to embed itself in the wider community as we prepare to create a buzz of excitement and anticipation ahead of our opening in the coming weeks.”

At the end of the fun summer-long event, which engages with families and visitors to the city, all the big Bees will be auctioned off to raise money for the Lord Mayor’s We Love Manchester charity, which works to improve the lives and life chances of people in Manchester.

Jessica, the 25-year-old artist who created ‘Beejing’, said: “I’ve always been interested in Asian culture and art and I feel like ‘Beejing’ represents a lovely coming together of cultures.

“’Beejing’ is very gold in colour as I wanted it to look like an ornament. The sculpture also includes around 10 main colours plus variations of those. I feel privileged to think that ‘Beejing’ will stand tall outside such a beautiful hotel and in what is a fascinating area of Manchester city centre.”

She added: “It’s also been such a nice feeling to be welcomed into the Bee in the City community and Manchester. Everyone is so close-knit so it’s lovely to be part of the trail that is going to help families of the victims of the Manchester terror attack.”

The 19-storey dual-branded hotel is owned by M&L Hospitality and will house a Crowne Plaza over the first 12 floors and a Staybridge Suites on the seven immediately above.

Eccles-based brewery has Co-op contract in the “can”