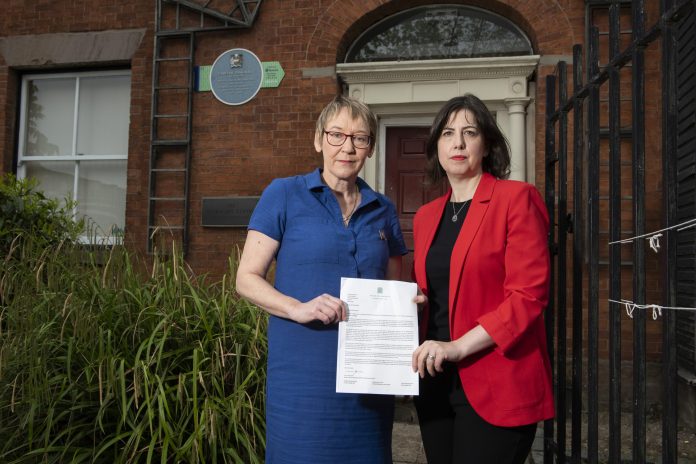 The Pankhurst Trust is welcoming a campaign being led by Lucy Powell MP to press for central government funding to secure the Pankhurst Centre in Manchester, the former home of Emmeline Pankhurst and the birthplace of the suffragette movement. 69 MPs from six political parties have joined together to sign a letter authored by Lucy Powell MP to the Prime Minister Theresa May asking her to pledge financial support, in this Centenary year, for what is arguably one of the most important sites of suffrage in the UK.

The Pankhurst Centre is where history was made in 1903 when Emmeline Pankhurst invited a group of women to meet in her home to form the Women’s Social and Political Union (WSPU), whose supporters would become known as suffragettes. It is the only museum dedicated to women’s suffrage and recieves no public funding for its maintenance or management. Instead it relies upon volunteers and supporters to run it, all of whom share an insight into the building’s immense historical significance and bring to life the story of the campaigning and sacrifices that went into securing the vote for women.

Symbolically the Pankhurst Centre is also home to Manchester Women’s Aid, which supports women and children affected by the consequences of domestic violence and abuse.

On 6 February 2018, the date when exactly 100 years earlier legistlation was passed giving the first women the right to vote, Prime Minister Theresa May privately visited the Pankhurst Centre. That a female Prime Minister should visit the former home of Emmeline Pankurst where the suffragette movement was established and meet with her great granddaughter, Dr Helen Pankhurst, was a hugely historic moment in itself. Securing the future of this iconic building, in the 2018 centenary year of some women gaining the right to vote, would send an equally strong message of our nation’s commitment to achieving gender equality and representation.

Lucy Powell MP, Labour and Co-operative Member of Parliament for Manchester Central, says, “I’m pleased to co-ordinate this cross-Party letter signed by 69 MPs calling on the government to protect the future of this vital institution. The home of the suffrage movement deserves better. Certainly if it was a centre marking a significant moment in the emancipation of men, it would be well-resourced and widely lauded.

“Whilst this year celebrates 100 years since some women got the vote, the past 12 months have also been a stark reminder that the struggle for gender equality is not yet over. #MeToo, #TimesUp and the recent Westminster sexual harassment scandal demonstrate that sexism still exists. A transformed Pankhurst Museum would be a powerful tool to tackle gender inequality through education, a fitting tribute to the suffrage movement, and ensure that this important part of our history is remembered after 2018.”

Gail Heath, Chief Executive of the Pankhurst Trust, says, “For too long The Pankhurst Centre has been left in a precarious situation struggling to fund essential repairs and to open the museum more than once a week. Its hugely significanct role to the nation’s democratic history needs to be acknowledged and its future secured as an important legacy for our grandchildren and generations to come. If ever there was a time to do this, it is this year, when the nation is marking the Centenary of Votes for Women, and we are delighted that as our local Member of Parliament, Lucy Powell MP is seeking to support us in finding the transformational investment critical to its long-term sustainability.”

The future vision for the Pankhurst Centre is for the building to be repaired, restored and updated to take its place as a museum of world-standing that tells the story of women’s equality from a historical and contemporary perspective. Extented opening hours (from its current one day a week and alternate Sunday afternoons), a schools programme, events programme and exhibitions are all part of this vision.

To achieve this, it will be applying for Heritage Lottery Funding of c£4.5million later this summer, alongside which the Pankhurst Trust needs to match fund £450,000. If successful this would also mean that the Pankhurst Centre would be able to put on display its growing collection of historical suffragette artefacts. These include one of Emmeline Pankhurst’s dresses that has been recently donated to the museum; a powder blue two-piece, complete with a Votes for Women sash, that would be a key collection item in any museum around the world.

The Pankhurst Centre is asking all MPs to support Lucy Powell’s letter, in particular those from Greater Manchester.  It is also encouraging people to write to their MPs to encourage them to support the campaign and lobby Ministers to secure the future of the Pankhurst Centre.  For further details on this visit: www.thepankhurstcentre.org.uk/pledgeforpankhurst