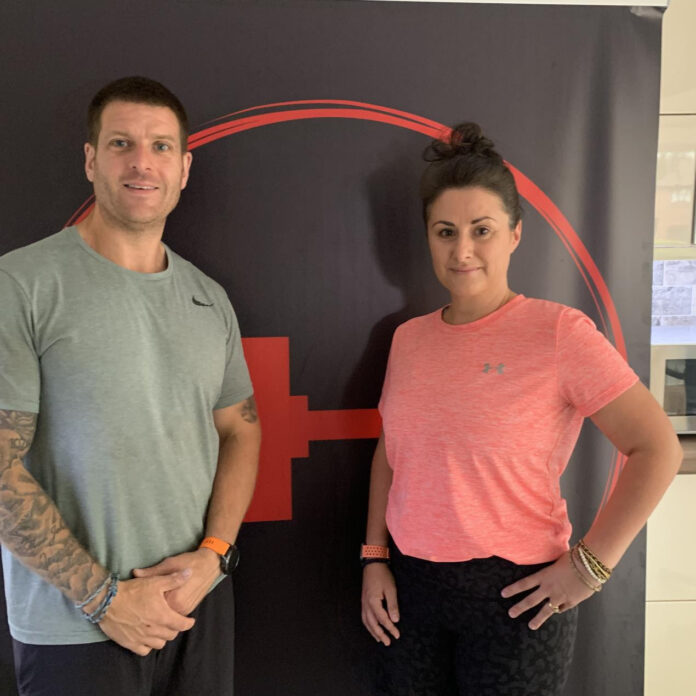 Two diehard Mancunians whose fitness business could have gone under in no time after coronavirus restrictions locked down their gym, have channelled their inner Hacienda, to create a brand-new concept that’s absolutely mint, ready for a step up to the next level on July 4, and hungry to take on a leading world fitness brand.

Nick and Louise Phillips were the owners of Hub Fitness in Radcliffe, which had to close its doors on March 23. Rather than sit back to see what might happen, the couple, both aged 38, who were in the Lake District with their two children at the time, spent the drive back planning their next move. With their favourite club mixes playing in their heads, there and then they made the decision to seize the day and build a business on the MINT principle of ‘Metabolising in No Time’.

The couple, self-confessed fans of the classic club tunes at Anthony Wilson’s legendary Whitworth Street club, had already been looking at premises within the city, where they had planned to house a boutique spinning studio. Suddenly, the vision of using this space as a filming studio instead, with a full-on club vibe in terms of mood, décor, lighting and tunes, and complete with a 70-inch screen which would allow Nick to deliver personalised feedback live to those he could see on camera, became compelling. Facebook posts putting much of the Radcliffe gym’s equipment up for sale followed, with the Nick and Louise deciding their fitness delivery would run to a different beat.

With a true Hub community behind them, sharing their passion for both fitness and the Manchester scene, they have created a new virtual HubLive concept during lockdown, not as a temporary measure but as what they believe is the ‘new order’ in fitness. The kids’ toy room was cleared, so workouts could be recorded on video and streamed live into the homes of subscribers, using Zoom technology. This enabled Nick to deliver the same motivation and support to his customers as before, but in a completely different way.

Rather than Hub Fitness customers having to spend precious time driving to the gym, exercising, showering and dashing back home or to work, their HubLive subscribers can simply roll out of bed, log on and join a high-energy virtual online fitness session, metabolising in no time. Some have borrowed equipment – anything from steps to Olympic bars – whilst others have been using tins of beans and bags of sugar. Necessity is the mother of invention.

7am sessions have already seen as many as 27 people coming together, in virtual space, to exercise. The intensity is just as full-on as in the gym. People have noted that their session has been a “hot one” but have cooled down in the paddling pool in the garden and posted on social media to prove it! It’s been fun, fabulous and truly mint.

Those who cannot join a session live, have the option of hitting the ‘on demand’ button and playing it at a time to suit. The platform is formatted in almost a Netflix way, to be built around people’s new lifestyles, not just under lockdown but in the years to come. It suits all, from mums with several kids at home with them, to pensioners wishing to stay in condition.

To say the Phillips got a kick out of this is an understatement. They are passionate about delivering fitness programmes at the highest level and, having realised that their three premium programmes – Strong, Boxing and Shred – not to mention yoga and pilates – worked just as well in this HubLive format, bigger plans were formed.

But it was not just about business development. Their customers have become a family and Nick and Louise were aware that some of that family were suffering mental health issues, which they had been managing prior to lockdown through fitness.

Being able to support these Hub Fitness family members, by giving them the structure and the exercise regime they required, meant the world. As one of the beneficiaries of their pivoting says: “HubLive has become my saving grace during lockdown. For me, mental health is key, as my job is very stressful and we all have our own personal problems to deal with. For me, HubLive is the time I give myself, without feeling guilty.”

Another opened up to say: “Suffering from depression and anxiety, I learnt over the past year how important exercise is to me, both physically and mentally. I know I will never be a Victoria Secret model but being fit and healthy (minus my many cheat days) is now important for me, especially when it comes to my mental health. I also lack motivation, so I need a personal trainer to push and guide me. With recent times changing and gyms closing, I was worried how life would be. HUBLive has been the perfect solution for me. I am able to train in the comfort of my own home which is so convenient for me, having three young kids and no childcare. I can find at least one of the live classes to attend, but there is also the option of on demand which has so many classes and such a variety! The live classes make you feel like your trainer is there with you, still guiding you through your sessions, making sure you are doing everything correctly. I am loving being part of this virtual family.”