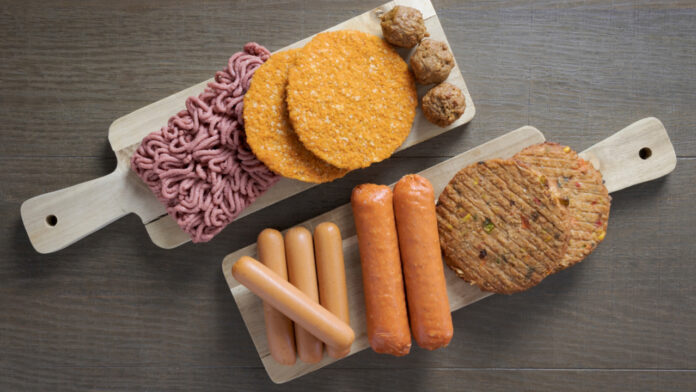 The Social Market Foundation paper says that encouraging the consumption of “alternative proteins” that do not come from animals would be politically easier for ministers than taxing traditional meats.

Raising cows, sheep and chickens contributes to carbon emissions, and to meet its climate targets, Britain will need to reduce meat consumption. Alternative proteins have a significantly lower emissions impact.

The SMF said that artificial meat could make it much easier for consumers to make that change, so ministers should significantly increase support for the fledgling industry.

The Government could recoup a wide array of benefits by supporting alternative proteins, including opening up a green export opportunity for British businesses, reducing the risk of zoonotic diseases and improving animal welfare.

The report points to government strategic and financial support for other markets associated with the Net Zero transition and said alternative proteins deserved similar attention.

The UK has committed £90 million to support new alternative protein research, but the SMF said that figure should rise. Otherwise, Britain risks being left behind a global race to develop alternatives to meat. Singapore last year became the first country to give approval for the sale of lab-grown chicken meat.

Animal agriculture accounts for 14.5% of the world’s greenhouse gas emissions. The official Committee on Climate Change has said the amount of meat we eat in the UK needs to be brought down by more than a third by 2050.

One study has suggested that plant-based substitutes have a greenhouse gas emissions footprint up to 93% smaller than conventional meat production.

However, despite the growing popularity of diets and products designed to reduce how much meat we eat, meat consumption is not falling quickly. The UK today consumes only 6% less meat per capita in the home than in 1974. (See notes)

The SMF said that significant policy interventions will be needed to help consumers change their buying and eating habits more quickly. Political conversation has so far focussed on the prospect of taxing people into reducing meat consumption. The Prime Minister has said he will not impose new meat taxes.

“The rapid expansion of the alternative protein market offers a way to reduce meat consumption through consumer choice.”

“A thriving alternative protein sector is likely to be a condition for winning consent for any future interventions designed to reduce meat consumption. Without adequate alternative product offerings, the contested issue of a future ‘meat tax’ could be met with resentment.”

“Governments around the world are recognising the need to incubate the alternative protein sector, given the high-risk, multi-disciplinary nature of R&D and the potential benefits to the public finances, economy, human health and the environment.

“The UK Government has already committed public funds and strategic support to a range of markets associated with the Net Zero transition, such as offshore wind and electric vehicles. Policymakers should consider applying the same logic to the alternative protein sector as a means of taking a non-intrusive first step towards reducing meat consumption in the UK.”

“A greener world will mean eating less meat, but politicians cannot expect consumers to easily stomach a tax which raises the price of meat. Early skirmishes suggest a so-called ‘meat tax’ could descend into an unconstructive cultural debate.

“A better solution would be to help consumers transition to more sustainable dietary habits by expanding the range of alternative protein products on the market. We can only expect consumers to switch from eating meat if product offerings are high-quality, affordable and easily accessible.

“The Government can help deliver a thriving alternative protein market by providing funding for a new research cluster and strategic support for the industry. The global race for alternative proteins is on and the UK should be leading the charge.”

City of Trees calls on organisations and individuals to tot up their tree planting...

Is this the future of shopping? Waitrose trials plastic free future