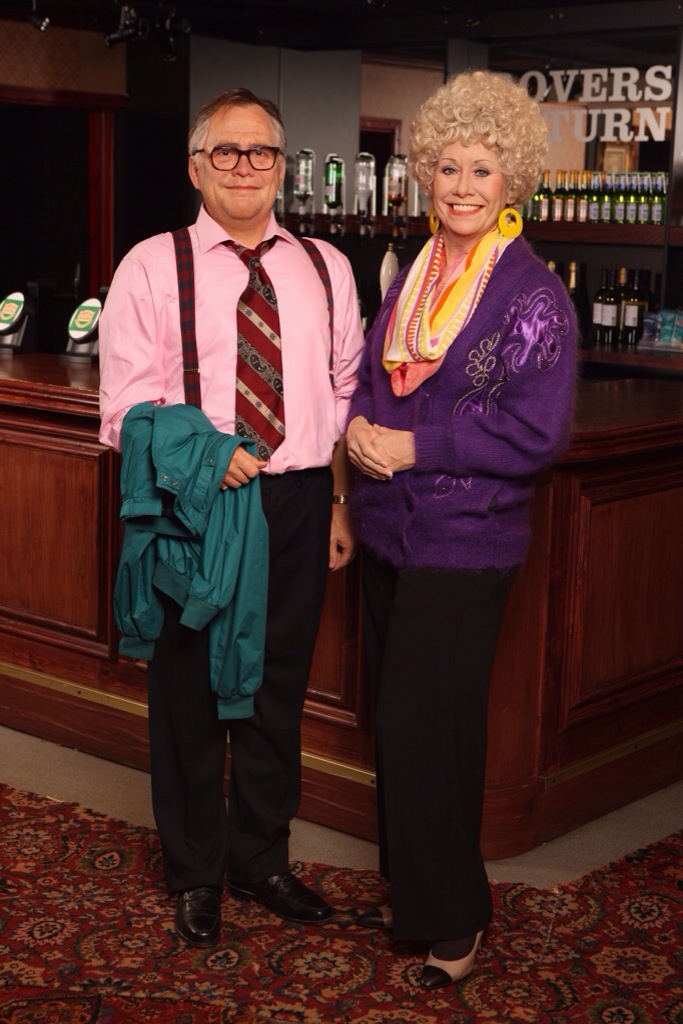 One of the best-known couples in television history, Coronation Street’s Jack and Vera Duckworth are the latest to have been immortalised in wax by Madame Tussauds.

The famously fiery couple have been chosen by guests visiting the world famous attraction as their favourites to join other legendary characters on the custom-built Rovers Return set.

Captured in their colourful ‘90’s heyday, the long-standing residents of No.9 Coronation Street appear as they are best remembered. Vera is dressed in her characteristic bright clothing and Jack in a pink shirt with a burgundy paisley patterned tie, braces and his classic cream jacket over his arm.

Each of the famous soap star figures has taken four months to create and Madame Tussauds sculptors have used archive footage supplied by ITV to expertly craft their wax figures. Additionally, the costumes have been hand made to ensure every detail from this snapshot in time is perfect.

Both Liz Dawn (Vera) and the family of the late Bill Tarmey (Jack) were closely consulted during the figure-making process, culminating in a private final viewing where they were able to see the figures and pour over every detail. Liz Dawn said: “I can’t believe how well they’ve captured the tiniest details – it really is like looking into a Vera-shaped mirror. It’s lovely to know that a character I’ve played for so long has had such an effect on the nation that she’s been immortalised like this – if only they could have done it when I was 20!”

Bill Tarmey’s widow, Alma, added: “I am sure Bill would have been very proud and honoured to see himself, as Jack, immortalised in such a lifelike figure. For myself it brought back many happy memories of the character Bill had portrayed for so many years, truly amazing! My congratulations and appreciation to the sculptor and all those involved in the production of the figure.”

Among the most-loved of all Britain’s TV characters, Jack and Vera were no strangers to Blackpool. In fact, when they weren’t in the middle of an argument, they often talked on the Corrie cobbles about retiring to the seaside resort. So it feels justifiably fitting that they should join other characters in the fully licensed Rovers Return set, which already includes fellow legends Ken and Deirdre Barlow, Hilda Ogden and Bet Lynch.