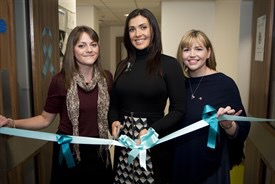 Coronation Street star Kym Marsh was on hand to formally open a new surgical ward at The Christie.

The surgical gynaecological oncology ward is offering a new service in a completely refurbished space at the world-renowned cancer centre.

And Kym said: “I feel a very strong attachment to The Christie. I’ve not had personal experience of coming here but friends of mine have and they all say what an amazing place it is. The Christie was invaluable to them and I like to be involved in causes I feel passionately about.”

The new Ward 1 will also be the first purpose-built surgical gynaecology unit offering robotic surgery in the North West.
The ward will consolidate services that had previously been delivered at various centres across Greater Manchester, including Salford Royal NHS Foundation Trust and the University Hospital of South Manchester NHS Foundation Trust.
Christie Chief Executive Roger Spencer, said: “This is a bespoke inpatient environment for a certain group of patients and the feedback we’ve had so far is that they’re delighted with the facilities. We’re very pleased that Kym was able to help us open it officially.”
Patient Louise Hassall, from Wistaston near Crewe, who was diagnosed with cervical cancer in 2010, said: “It was a privilege to be there and the facilities are brilliant.
“It’s lovely that all the gynae patients are in one place, because it helps to talk to people who understand what you’re going through on your journey and can relate to you.”
Senior sister Emma Turner, manager of Ward 1, said the 10-bed ward had been designed as an airy and welcoming environment which would also offer state-of-the-art surgery.
“This is a very exciting development – we have world-class surgeons and patients will have all the additional support of a number of different services, including psychological support,” she said.
Matron Annie Dewberry, added: “We also have the very latest in robotic technology, so patients will know they’re receiving the best care it’s possible to have.
The ward features a patient lounge and a quiet area and has been colour-coded in bold shades to help patients suffering from dementia find their way around.
Kym was joined for the official opening by Christie patients Louise Hassall from Crewe and Hayley Oakes from Glossop.

Children’s funding slashed by a third per child, leaving thousands at risk of falling...