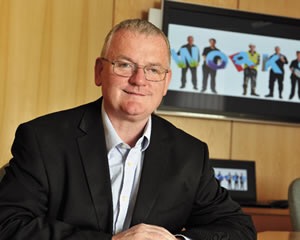 TAMESIDE Council’s executive leader, Cllr Kieran Quinn, has set out the financial challenges facing the authority in a strongly worded letter to the Prime Minister, David Cameron.
Last week it emerged that Mr Cameron, who is MP for Witney, had written to the leader of Oxfordshire County Council, Cllr Ian Hudspeth, complaining about significant cuts to frontline services such as libraries and day centres for the elderly.

This led to a reply from Cllr Hudspeth – a member of Mr Cameron’s party – stating that the Prime Minister did not understand the pressures under which local government is forced to operate in the age of austerity.
In his own letter to 10 Downing Street, Cllr Quinn has stressed the severity of the cuts that have been imposed on Tameside Council since 2010, and challenging the suggestion that these can be confined to back-office functions, leaving frontline services untouched.
He writes: “As the leader of Tameside Council, a local authority that has lost £104 million of our controllable spend since 2010, and is expecting to have to remove a further £94 million by 2020 – essentially cutting our budget in half – it is a relief to know that you are genuinely concerned about the impact that the cuts imposed by the current and previous government are having on communities across the nation.”
Cllr Quinn also asks that the Prime Minister’s offer of access to the No 10 policy unit for help in devising creative solutions to funding problems be extended to all authorities struggling under the yoke of austerity.
The Tameside Council leader said: “Mr Cameron’s letter to Oxfordshire County Council suggests he is totally unaware of the effects his government’s cuts are having, even in his own constituency.
“I await his reply with great interest.”
The letter

Dear Prime Minister,
I write with regard to your letter of Monday 15th September addressed to the Leader of Oxfordshire County Council, Cllr. Ian Hudspeth, which set out your disappointment at the cuts being proposed to frontline Council services in your constituency.
As the leader of Tameside Council, a local authority that has lost £104m of our controllable spend since 2010 and is expecting to have to remove a further £94m by 2020 – essentially cutting our budget in half, it is a relief to know that you are genuinely concerned about the impact that the cuts imposed by the current and previous government are having on communities across the nation.
I was however troubled to read that you appear to believe that cuts on this scale can be solved through efficiencies in back office functions, or through unspecified ‘creative’ solutions. Having had to deal with a reducing budget and rising demand for more than 5 years, with Tameside Council having to make spending reductions even prior to 2010, I can assure you that protecting frontline services has been of paramount concern as Leader and our back office functions were the first services to be reduced. I would also like to take this opportunity to showcase our Vision Tameside programme, collaboration between Tameside Council and College to share assets, regenerate one of our towns and transition Tameside to a high wage, high skilled economy – one of many examples of the collaboration you believe will offset the money being taken away from us.
I note that in your letter to Cllr. Hudspeth, an offer of access to the No. 10 Policy Unit was made to help devise further ‘creative’ solutions. I assume that in the interests of fair play this offer will be open to all Councils who are facing similar, and in Tameside’s case more severe, financial pressures compared to Oxfordshire. I would be most interested in making use of such an opportunity, particularly in