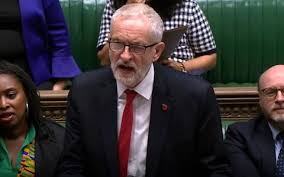 Jeremy Corbyn will use his first major speech of the General Election campaign today to take aim at what he calls “a corrupt system”: the tax dodgers, bad bosses, big polluters, and billionaire-owned media holding our country back.

The Labour leader will say: “This election is a once-in-a-generation chance to transform our country, take on the vested interests holding people back and ensure that no community is left behind.”

He will promise that “real change is coming” because “when Labour wins, the nurse wins, the pensioner wins, the student wins, the office worker wins, the engineer wins. We all win.”

Corbyn will say that Labour puts its faith in the “spirit and commitment to community” of the British people, saying “it is your country”, not the property of “born-to-rule Conservatives” who “protect the privileged few”.

The Labour leader will call out representatives of “a rigged system”: such as the Duke of Westminster, Mike Ashley, Jim Ratcliffe, Crispin Odey and Rupert Murdoch.

He will say that the elite are scared of the British people, which is why “they’ll throw everything at us” in this election “because they know we’re not afraid to take them on.”

But Labour is on the side of the many against the few who run a corrupt system, Corbyn will say.

Shrugging off pundit concerns about a winter election, Corbyn will declare, “Labour will be out there in every city, town and village with the biggest and most confident campaign that our country has ever seen bringing a message of hope and change to every community. Even if the rivers freeze over, we’re going out to offer real change for the many not the few.”

Promising that real change is coming, Jeremy Corbyn MP, Leader of the Labour Party, is expected to say:

“We put our faith in the British people’s spirit and commitment to community. It’s your country.

“That’s why we stand with you. We stand for the many. Boris Johnson’s born-to-rule Conservatives protect the privileged few. They’ve slashed taxes for the richest and vital services and support for everyone else.

“But real change is coming.

“We will end the Conservatives’ great rip-off by putting rail, mail and water into public ownership so they work for everyone, not just Tory donors and shareholders in tax havens.

“We will invest in every nation and region, rebuild our public services and give our NHS, schools and police the money they need by taxing those at the top to properly fund services for everyone.

“This election is a once-in-a-generation chance to transform our country, take on the vested interests holding people back and ensure that no community is left behind.”

On scaring the elite, Jeremy Corbyn is expected to say:

“You know what really scares the elite?

“What they’re actually afraid of is paying their taxes. So in this election they’ll fight harder and dirtier than ever before. They’ll throw everything at us because they know we’re not afraid to take them on.

“So are you on the side of the tax dodgers, who are taking us all for a ride? People who think it’s ok to rip people off, hide their money in tax havens so they can have a new super yacht. Or the children with special educational needs who aren’t getting the support they deserve because of Tory and Lib Dem government cuts?

“Whose side are you on? The dodgy landlords, like the Duke of Westminster, Britain’s youngest billionaire, who tried to evict whole blocks of families, to make way for luxury apartments? Or the millions of tenants in Britain who struggle to pay their rent each month?

“Whose side are you on? The bad bosses like Mike Ashley, the billionaire who won’t pay his staff properly and is running Newcastle United into the ground? Or his exploited workforce, like the woman who was reportedly forced to give birth in a warehouse toilet because she was terrified of missing her shift?

“Whose side are you on? The big polluters like Jim Ratcliffe, Britain’s richest man who makes his money by polluting the environment? Or the children growing up in our cities with reduced lung capacity because of choking pollution?

“Whose side are you on? The greedy bankers like Crispin Odey, who makes millions betting against our country and on other people’s misery and donated huge sums to Johnson and the Conservative Party? Or are you on the side of working people, the people who create the wealth that’s then squirreled away in tax havens?

“And whose side are you on? The billionaire media barons like Rupert Murdoch, whose empire pumps out propaganda to support a rigged system. Or the overwhelming majority who want to live in a decent, fair, diverse and prosperous society?

Muslim Council of Britain accuses Tories of ‘deceit’ over Islamophobia