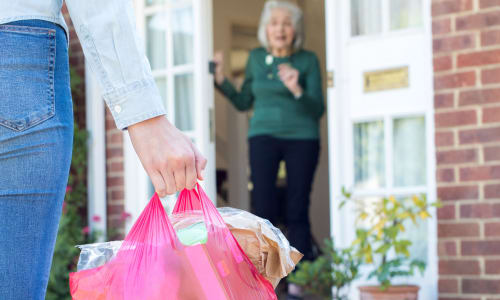 The polling, conducted by YouGov, shows that the British public overwhelmingly value the charity sector, with 84% of people in the UK believing charities play an important role in society today. Recognition that the coronavirus crisis has pushed charities and community groups to the fore is high, with 50% of British adults saying charities and community groups played a “very” important role supporting society during the pandemic.

When coronavirus hit, there was a surge in people putting up their hands to help others in need, both through charities and within their neighbourhoods. The research suggests 18 million people in England helped friends or neighbours with tasks like shopping and dog walking during the first lockdown (March-June).

Yet with the pandemic far from over, there are signs that the surge in community spirit is starting to flag. According to PBE estimates, 6 million fewer people in England have volunteered or supported their neighbours during the second lockdown, with only 26% of people having done so since the start of October*. This is despite the need for community action remaining high, with ONS measures of acute loneliness hitting their highest levels since March at the start of November.

Not only are individuals doing less to help others, the British public is also concerned that the social sector which provides the infrastructure for community action is not fulfilling its potential either. The research identifies a number of barriers holding it back from helping as many people as it could. 57% of British adults believe that charities are understaffed, over a third (35%) believe charities are wasteful and 31% believe there are too many charities in the UK.

The new report argues that if charities are to fully achieve their potential, and to harness the community spirit that Britons showed was possible through the first lockdown, systemic change is needed. 40% of British people think Britain would be a better place if charities and community groups had more involvement in decision making at a national level, while 42% agree having additional support from government would help charities achieve more.

An ambitious new research Commission is being launched today to help create that change. The two-year programme run by Pro Bono Economics has been set up to tackle the systemic challenges stopping civil society delivering on its potential. The initiative has cross-party interest, with Culture Secretary Oliver Dowden and Labour Shadow Minister Rachel Reeves speaking at its launch event. With 60% of people agreeing charities and community groups will play an important role in the country’s recovery from COVID-19, and young people most positive about the contribution these organisations can make, the Law Family Commission on Civil Society hopes to help make that possible.

“At the start of this crisis the nation’s spirits were lifted by the multiple acts of kindness we saw. But that spirit is rapidly ebbing away. The Prime Minister realises this which is why he ordered the Kruger review. The public and charities are equally aware of time running out. The spending review spelt out how the economy and public services are expected to evolve but said little about the role of the civic sector. If we are to build back better and level up we need urgently to unleash the full potential of this vital sector.”

Greater Manchester to get one billion pounds to fund public transport