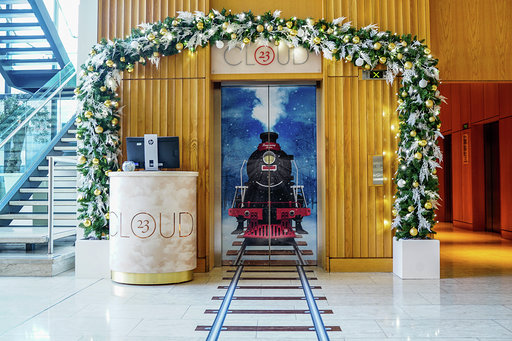 Cocktail lovers across Manchester are in for a treat should they happen to take a trip to Cloud 23 this Christmas.

Located on the 23rd floor of the lavish Hilton Manchester Deansgate, simply follow the train tracks and take the lift up to the Cloud Express.

There’s a reason its spectacular sight was crowned “‘Window with a View” in Manchester last year, and as it was my first time visiting the bar I was suitably impressed.

Once seated next to the window – which suffered no shortage of people taking snaps for Instagram – I was presented with three of the cocktails from the Champagne Flight, which costs £20.

Fans of unconventional flavours will enjoy the unique twist on a classic drink, and the first drink I tried was the tiramisu-inspired Spirit of Christmas, which includes banana liqueur, Martell VSOP cognac and white cacau.

Next up was my favourite, the Christmas Sparkle, featuring passion fruit, goji berry and Tanqueray seville to give it a fruity kick. As someone who isn’t a massive fan of champagne or gin, I was pleasantly surprised by this one.

Finally I tried the Joyeux Noel, which included sage and cranberry, and was by far the most unusual flavour.

After taking in the view one last time, I made my way down to the Podium Bar, which is decked out like an après ski lounge with snowflake projections on the ceiling and several Christmas trees decorated with shades of blue and white.

On the menu as part of the Ciroc vodka pop-up was a series of cocktails and a ski filled with shots, which I politely declined as it was a quiet Sunday afternoon. Single shots of blackberry, apple, vanilla and red berry are available for £4 each, or if you’re in the party spirit, a half ski can be purchased for £20 and a full ski will set you back £50.

Having never tried flavoured vodka before, I found myself enjoying all four of the £10 cocktails on offer, starting with Berry Christmas, a mix of red berry vodka, rose and prosecco. Very Velvety was second, combining vanilla vodka with lemon juice, apple, pear and cinnamon.

Then came my favourite, the Festive Bramble, which included the black raspberry vodka, lemon and creme de mure. Despite the freezing temperature outside, this drink transported me right back to the summer months with its super sweet taste, reminiscent of those rainbow Rowntrees ice lollies I loved when I was younger (and still do).

As the sky darkened and shoppers started making their way home, I sampled the final drink, aptly titled Father Christmas. This one is certainly not for the faint hearted as it had Ciroc amaretto, bulleit rye whisky and just a dash of orange, a far cry from the fruity flavour of the Festive Bramble.

Sadly I could only manage a few sips, but if you like a cocktail that packs a punch, this one’s for you.

Whether you’re on a big night out or just fancy a quick drink after visiting the Christmas markets, I’d highly recommend these two bars for that little slice of luxury during the hectic festive period.