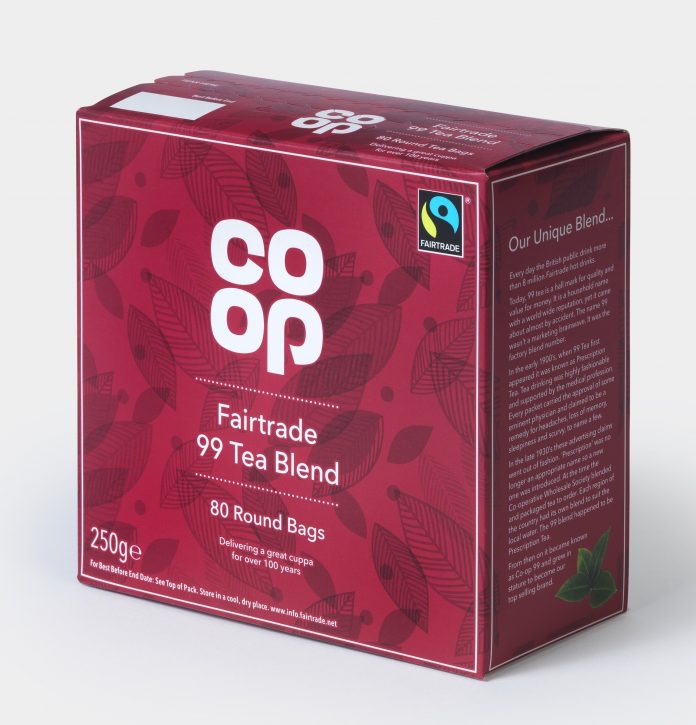 The Manchester based Co-op is brewing up a fully biodegradable paper tea bag, making it the first retailer to find a solution to the problem of plastic waste caused by the nation’s favourite beverage.

The convenience retailer’s famous own-brand 99 tea will be developed without polypropylene, which is an industry-wide method used to enable teabags to hold their shape. The move could save nine tonnes of plastic every year from being dumped into household rubbish and compost collections.

The Co-op, which sells around 4.6 million boxes of tea annually (around 367 million teabags) has joined forces with its tea supplier, Typhoo, and Ahlstrom-Munksjö, specialists in sustainable fibre solutions, to develop the new method of heat sealing bags which will eliminate the use of the more widely-used plastic seal.

The new bio-degradable bag which is due to undergoing rigorous testing in February, could be on shelves later this year. Intended to be rolled out across the Co-op’s entire own-label standard tea range, it will be fully compostable in food waste collections after use.

Jo Whitfield, CEO, Co-op Food, said: “Many tea drinkers are blissfully unaware that the teabag from their daily cuppa is sealed using plastic. Even though it’s a relatively small amount, when you consider the six billion cups of tea that are brewed up every year in the UK, we are looking at around 150 tonnes of polypropylene – that’s an enormous amount of accumulated plastic waste that is either contaminating food waste compost collections or simply going to landfill.

“A cup of tea is part of our national psyche, so we felt it was imperative that we fix the problem as soon as possible. We’re absolutely committed to reducing plastic in our packaging and want to ensure that tea lovers can enjoy a guilt-free brew.”