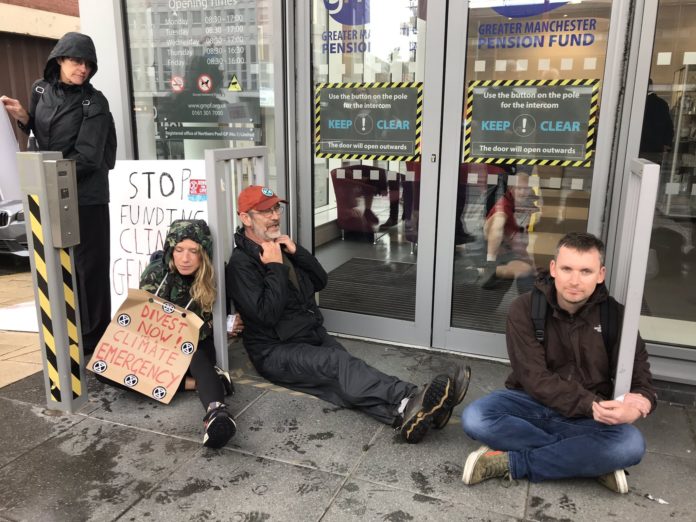 Climate Protesters have locked and glued themselves inside the headquarters of the Greater Manchester Pension Fund offices in Droylsden this afternoon.

They are demanding that the fund withdraw millions of pounds of investments that it has in fossil fuel Companies.The protesters are saying that in the light of climate change, the investments are immoral and untenable.

Neil Hancox from Extinction Rebellion says that “GMPF say that they will end their investments by 2050, this is clearly too late given that we are in a climate emergency, but it is also clearly now immoral, giving the overwhelming scientific evidence of damage  caused by emissions from fossil fuels.

According to a 2018 report, over 10% of the fund,up to £2 billion, is invested in oil, gas and mining companies, making it the dirtiest pension fund in the country say the protesters.

“Parliament, the Labour Party and several Greater Manchester councils have declared a climate emergency. The GM Combined Authority want the region to be one of the greenest places in Europe. Young people are demanding urgent action and both the Governor of the Bank of England and the Pensions Minister have warned of the danger of continuing to invest in fossil fuels as we move towards renewable energy. Yet still GMPF invests in companies that are driving climate change.”

We need to act together to tackle climate change. GMPF is totally out of touch with the public mood and has no clear plan for urgently taking pensioners’ money out of fossil fuels”
said Fossil Free Greater Manchester member Stuart Bowman adding

“Despite the changing public mood, GMPF is failing to act, putting pensioners’ money at risk and adding to the climate crisis. Where it was once considered a leader, GMPF is now lagging behind other pension funds in its glacial response to the climate emergency”.

Loganair steps in to run 16 former Flybe routes including Aberdeen and Edinburgh to...