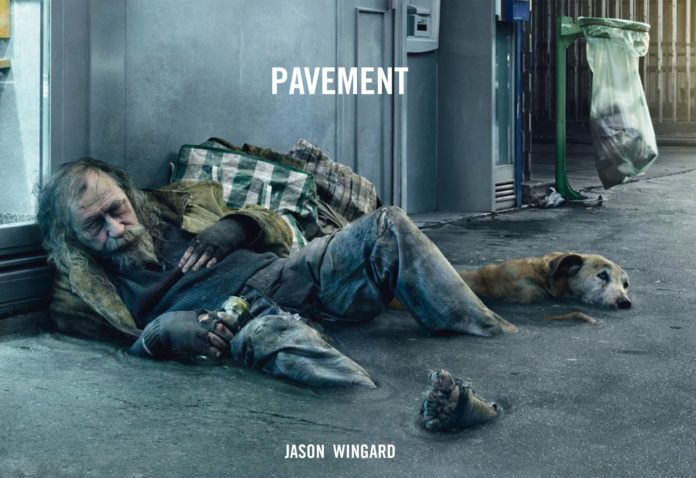 After a decade of making award-winning short films and most recently, two fantastic feature films, In Another Life and Eaten by Lions, Manchester based writer/director Jason Wingard thought his focus would be purely on ‘features’, going forward.

But in a case of ‘never say never’ a passion project tempted BIFA winning Wingard back into to short film making with the creation of Pavement– which he describes as a modern-day parable and the surreal story of a homeless man sinking into the pavement.

After an injection of funding to get the film underway from The Uncertain Kingdom, the challenge is to produce something which should cost around £50,000, ‘on a shoestring’.

The aim is to exceed their budget of £10,000 with all additional funds being donated to two local charities, Barakah Food Aid and The Mustard Tree, both supporting people in poverty and tackling the issues of homelessness in in Manchester.

The film is incredibly ambitious due to the use of amazing special effects and the sheer number of people involved in making the project happen, including the huge amount of post-production work.

Hannah Stevenson, the producer of the film and long-time collaborator with Wingard, working on Eaten by Lionsand In Another Life, had to garner support from many sources, not least attracting the talent involved, including Steve Evets, Looking for Ericand Liz White, from Life on Marsfame.

It was filmed on location at the Manchester Metropolitan University Brooks Building.

“This was an incredibly humbling experience and restored our collective belief in human kindness” says Wingard.  “320,000 people in Britain are now homeless and numbers keep rising.   Our film tackles this dreadful statistic in a unique way” he adds.

On set, a passer-by, who didn’t realise filming was taking place, stepped in during filming to protect the central character. Quite a brave thing to do, since he was on his own and he had to square up to two burley men in the scene.  Such is the realism of the film and its sad reflection of everyday life on UK streets.

Wingard, no stranger to tackling social issues on camera, is determined to smash their crowdfunding target so they can donate as much as possible to some great local charities.

If his past record is anything to go by, this will be an incredible film with tons of passion and humility.    Go fund!

The crowdfunding page can be found here: https://www.indiegogo.com/projects/pavement–4?create_edit=true&fbclid=IwAR2Suj_pLFl8xK1mxzmDjIgb_2525f4TV-vmB5Rh4gFKJdnBP7ncGgLeUP4#/