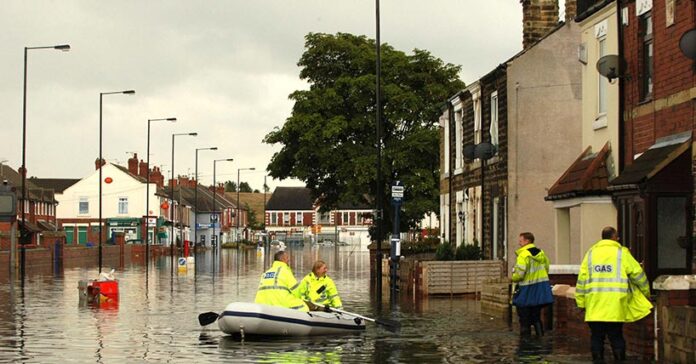 Investigating how climate affects intense rainstorms across Europe, climate experts have shown there will be a significant future increase in the occurrence of slow-moving intense rainstorms. The scientists estimate that these slow-moving storms may be 14 times more frequent across land by the end of the century. It is these slow-moving storms that have the potential for very high precipitation accumulations, with devastating impacts, as we saw in Germany and Belgium.

Led by Dr Abdullah Kahraman, of Newcastle University’s School of Engineering, the researchers used very detailed climate model simulations at the UK Met Office Hadley Centre. They found that slower storm movement acts to increase the amount of rainfall that accumulates locally, increasing the risk of flash floods across Europe beyond what has been expected based on previous studies.

Published in the journal Geophysical Research Letters, the study results show that storms producing intense rain may move slower with climate change, increasing the duration of exposure to these extremes.

Communications were cut in many areas and entire communities lay in ruins after swollen rivers tore through towns and villages in the western states of North Rhine-Westphalia and Rhineland-Palatinate as well as parts of Belgium and the Netherlands.

After days of heavy rain, 103 people have died in Germany alone, the largest number killed in a natural disaster in the country in almost 60 years. They included 12 residents of a home for disabled people surprised by the floods during the night.

In Belgium, which has declared a day of mourning on Tuesday, officials said there were at least 20 dead and another 20 missing.

Dr Abdullah Kahraman, who is also a visiting scientist at Met Office, said: “With recent advances in supercomputer power, we now have pan-European climate simulations resolving the atmosphere in high detail as short-range weather forecasting models do. These models have grid spacing of approximately 2 km, which allows them to simulate storm systems much better, resulting in better representation of extremes.

“Using these state-of-the-art climate simulations, we have developed metrics to extract potential cases for heavy rainfall, and a smaller, almost-stationary subset of these cases with the potential for high rainfall accumulations. These metrics provide a holistic view of the problem, and help us understand which factors of the atmosphere contribute to heavy rainfall changes.

“This is one of the first studies to explore changes in the speed of such heavy rainfall systems – an important aspect contributing to flood risk. Currently, we are also investigating other extreme weather types by examining the climate simulations data with a severe weather forecaster’s perspective.”

Professor Hayley Fowler, of Newcastle University’s School of Engineering, added: “Governments across the world have been too slow in reducing greenhouse gas emissions and global warming continues apace. This study suggests that changes to extreme storms will be significant and cause an increase in the frequency of devastating flooding across Europe. This, alongside the current floods in Europe, is the wake-up call we need to produce improved emergency warning and management systems, as well as implementing climate change safety factors into our infrastructure designs to make them more robust to these severe weather events.”

Professor Lizzie Kendon, Science Fellow at the Met Office and Professor at Bristol University, said: “This study shows that in addition to the intensification of rainfall with global warming, we can also expect a big increase in slow-moving storms which have the potential for high rainfall accumulations. This is very relevant to the recent flooding seen in Germany and Belgium, which highlights the devastating impacts of slow-moving storms.

“Our finding that slow-moving intense rainstorms could be 14 times more frequent by the end of the century under the high emissions RCP8.5 scenario, shows the serious impacts that we may expect across Europe if we do not curb our emissions of greenhouse gases.”

The study findings are relevant to climate mitigation and adaptation policy in Europe, with specific implications for future flooding impacts, the design of infrastructure systems, and the management of water resources.

Currently, almost stationary intense rainstorms are uncommon in Europe and happen rarely over parts of the Mediterranean Sea. Accurate predictions of future changes in intense rainfall events are key to putting effective adaptation and mitigation plans in place to limit the adverse impacts of climate change.

Study finds River Tame one of the most polluted by microplastics