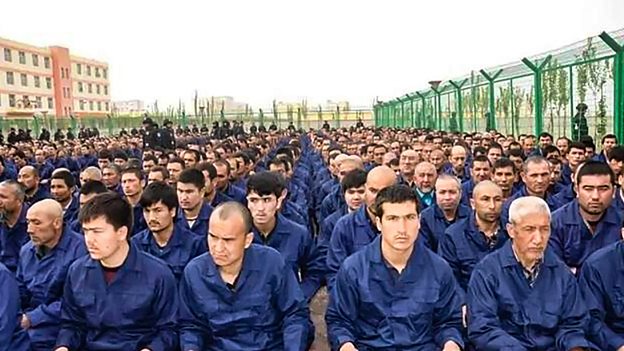 Leaked documents reveal for the first time how China is running a network of high-security prisons designed to brainwash hundreds of thousands of people. China has consistently claimed the camps in the Xinjiang region offer voluntary education and training. But official documents leaked to the International Consortium of Investigative Journalists and seen by BBC Panorama show how inmates are locked up, indoctrinated and punished.
The highly classified Chinese Communist Party documents show the secret plans behind the mass-detention camps that are thought to have held around one million ethnic Uighurs and other minority Muslims in China’s Xinjiang province. China Cables is an investigation organised by the International Consortium of Investigative Journalists (ICIJ), and is a result of a collaboration of 17 media partners, including BBC Panorama.

The China Cables investigation provides – in the Chinese government’s own words and authoritative detail – a description of the country’s extrajudicial internment and indoctrination of Muslims as part of a sweeping programme of mass surveillance and population control.

The 2017 documents reveal that what the Chinese government has been calling ‘vocational and educational centres’ are in fact locked, closely guarded indoctrination camps. Prisons by another name, these camps are holding ordinary citizens swept up in mass arrests.

The documents include a detailed memo by Xinjiang province’s top security chief laying the operational foundation for the camps. It explains how to prevent escapes, how to maintain secrecy about the camps’ existence and how to monitor and control every aspect of the detainee’s life.

It says: “The students should have a fixed bed position, fixed queue position, fixed classroom seat, and fixed station during skills work, and it is strictly forbidden for this to be changed.

“Implement behavioural norms and discipline requirements for getting up, rollcall, washing, going to the toilet, organizing and housekeeping, eating, studying, sleeping, closing the door and so forth.”

The memo says guards should: “Increase discipline and punishment for behavioural violations.”

It also lays bare a behaviour-modification ‘points’ system to mete out punishments and rewards to inmates. Detainees are only considered for release when they have earned sufficient points.

Other leaked documents show how the government’s high-tech surveillance and ‘predictive policing’ programme collects huge amounts of personal data through manual searches, security cameras and other means to identify candidates for detention, even flagging for arrest users of certain mobile phone apps. They include explicit directives to arrest Uighurs with foreign citizenship and to track Xinjiang Uighurs living abroad. Some of them have been deported to China by authoritarian governments. Among those implicated in the global dragnet are China’s embassies and consulates.

The China Cables investigation significantly advances the world’s knowledge about the largest mass internment of an ethnic-religious minority since World War II. They reveal the camps’ true function as extrajudicial indoctrination centres.

The Chinese Embassy in the UK dismissed the documents as fake news and said the population supported measures designed to stop terrorism.

“The region now enjoys social stability and unity among ethnic groups. People there are living a happy life with a much stronger sense of fulfillment and security.

“In total disregard of the facts, some people in the West have been fiercely slandering and smearing China over Xinjiang in an attempt to create an excuse to interfere in China’s internal affairs, disrupt China’s counter-terrorism efforts in Xinjiang and thwart China’s steady development.”

China Cables – Panorama will be shown on BBC One at 8.30pm on Monday 25 November. The investigation has been published on the BBC News website

A world-class future for transport in Greater Manchester?