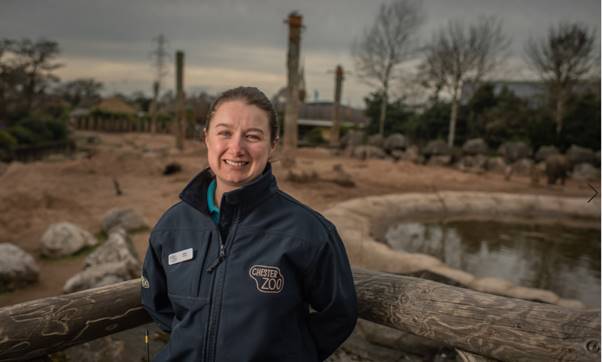 A conservationist from Chester Zoo has embarked on a year of major challenges, in support of the zoo’s Never Forget fundraising campaign for threatened Asian elephants.

Asian elephants once lived widely across Asia, but their numbers have plummeted and they are now restricted to a fraction of their former range in the wild. Less than 40,000 remain.

Devastated by habitat loss, poaching, disease and direct conflict with humans, the species is officially listed as endangered.

Conservationist Katie Morrison is part of the specialist team who cares for Chester Zoo’s family herd of elephants, as part of a European endangered species breeding programme.

In a bid to help further the fight to prevent their extinction worldwide, Katie’s 2019 will involve a major fundraising challenge every month, ranging from cycling events and mountain climbing through to a ‘Go Sober’ challenge in December.

The money raised will go towards the zoo’s ongoing Never Forget campaign, which has already contributed more than £200,000 towards the search for a cure to a deadly disease, which is threatening elephants in the wild and in zoos globally.

Elephant endotheliotropic herpesvirus (EEHV) is known to be present in almost all Asian elephants, but only develops into an illness in some, usually young elephants. When it strikes, it is almost always fatal.

The zoo’s scientists are leading the global campaign to find a cure.

The public donations, a major partnership between the zoo and The University of Surrey, and an international collaboration of conservationists have helped to make progress in the hunt for a solution to the crisis – but at the moment a cure to the virus remains elusive.

Katie hopes her year of personal challenges will increase awareness of the problem conservationists are facing, and generate additional resources towards the mission.

She said: “Here at the zoo, our elephant family has, tragically, suffered losses to EEHV. This terrible virus has claimed the lives of young elephants in the herd, which is devastating.

“We’re caring for the species day in, day out as part of the conservation breeding programme. Our teams are protecting the species from human elephant conflict in the wild in India. Our scientists are leading the global search for a cure to the EEHV virus. Despite all this, as it stands, Asian elephants are still endangered. So I want to do more.

“We can all do our bit as individuals. Fundraising challenges like this are a great way that we can act for wildlife in our spare time. Initially I signed up to complete the half Ironman, but I kept thinking of more challenges I could do. Eventually, I thought I’d just devote my whole year to it!”