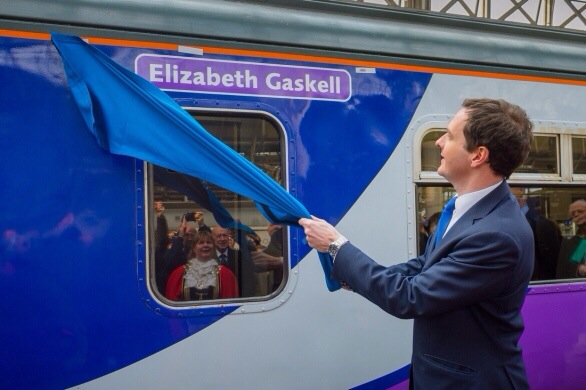 One of the most influential writers of the Nineteenth Century and a resident of Manchester has been honored across our rail network as Northern Rail unveiled the Elizabeth Gaskell train.

The event took place at Manchester Piccadilly and saw Northern’s Managing Director, Alex Hynes and George Osborne unveil the train’s nameplate and give speeches to pay tribute to the Cheshire-based author.

The train is a 156 Northern unit and will travel the network around Greater Manchester and Cheshire, the inspiration for much of Ms Gaskell’s work, such as “Cranford”.

Alex Hynes comments: “We name some of our trains after ‘Great Northerners’ and Elizabeth Gaskell certainly fits that description. Her work has left a legacy on this part of the world and we are delighted to be able to honour her in this way.”

George Osborne said “I was delighted to be invited to name one of Northern Rail’s diesel trains “Elizabeth Gaskell”, particularly as the train will travel on the mid-Cheshire line through Knutsford, which is the basis for her novel Cranford. A large crowd gathered at Piccadilly station, including members of the Gaskell Society, members of the Mid-Cheshire Rail Users Association and representatives from the Heritage Centre to watch the unveiling of the plaque.”

Plans past for three Greengate towers in the heart of Salford