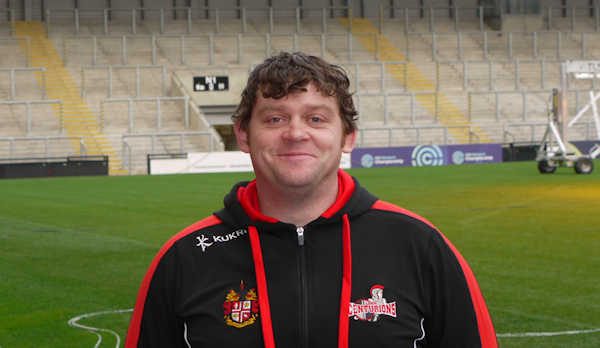 heads a new-look coaching team at Leigh Sports Village with Paul Anderson continuing his role as assistant coach while Micky Higham will continue his illustrious playing career combined with the role of conditioner.

Leigh Centurions owner Derek Beaumont said: “I am delighted to get John on board and continue with a home-grown coach which we had with Kieron (Purtill). I would at this time like to thank Kieron for his efforts at the Club in what were extremely difficult circumstances for him. He was gallant and professional throughout and worked towards the end under almost impossible conditions such was his commitment to the Club. I fully understand his decision to take the Widnes job and I wish him every success in his future.

“With regards John I was very impressed with the way he has developed as a coach. I know him extremely well from his playing days. He is extremely passionate about the town and people of Leigh and if you cut him in half it would say Leigh. Despite this, as much as it choked him, his professionalism showed through steering Featherstone to victory over us for the Shield and his ability to get the most out of people was demonstrated when they beat us with 14 men prior to our injuries when we were still strong.

“John massively cares for the Club, as do Ando and Micky. They are Leigh’s very own ‘Three Musketeers’ and are the ideal people to reinstate Leigh into the Club and some pride in receiving the shirt.

“I have passed over to John all the players that I had been approached about and looking at with KP, so he can quickly look to put together a competitive part-time team in a short space of time.”

John Duffy said: “I had a meeting with Ando and Micky and we are all in the same boat. Once you have played for Leigh it never leaves you.

“Having them on board speaks volumes and we all have a burning desire to get the Club back to where it needs to be.

“I’d like to thank Derek and the rest of the board for giving me this opportunity. I’ve come back twice before as a player and I was especially proud of what we achieved under Derek in 2004 getting promotion to Super League. That was an outstanding experience and we want to bring back those good times.

“At the minute we are trying to rebuild the Club and to do that we are going to concentrate on local players. Leigh lads who’ve played for the Club before and who are coming home, Leigh lads who have always wanted to play for Leigh and lads who want to come and play for me.

“I’ve been part of teams like that in the past where everyone is local and on the same kind of money and you can build a fantastic team spirit.

“It’s a one in a million experience being at Leigh and playing for the Club and those fans grabs you and you can’t let go of it.

“The fans and sponsors are vital to what we want to achieve here. Everyone in my street will be suddenly talking to me again. They are a special group of fans with the passion they have for the Club.

“I remember the season after Hull KR got relegated and all their fans stuck by them. I was coach at Swinton at the time and they brought a huge army of fans to our ground. If we can recreate something like that it would be fantastic.”

Duffy played 202 games for Leigh in three separate spells between 2001 and 2012 in a notable playing career that saw him make his Super League debut as a 16-year-old with Warrington Wolves in 1997. He made over 350 career appearances and he also played for Salford, Chorley, Whitehaven and Widnes as well as representing Scotland in three decades between 1997 and 2012.

He was a key part of the Leigh side that won promotion to Super League in 2004, partnering Tommy Martyn at halfback in the dramatic National League One grand final victory over Whitehaven and he also played in Leigh’s National League Cup Final winning teams of 2004 and 2011. The Whitehaven victory, after extra-time was especially sweet for Duffy who was a member of the Leigh side defeated in both the 2002 and 2003 grand finals against Huddersfield and Salford respectively.

Since retiring as a player Duffy has built up his reputation in the coaching ranks at Swinton Lions, Featherstone Rovers and as co-coach alongside Chris Chester with Scotland.