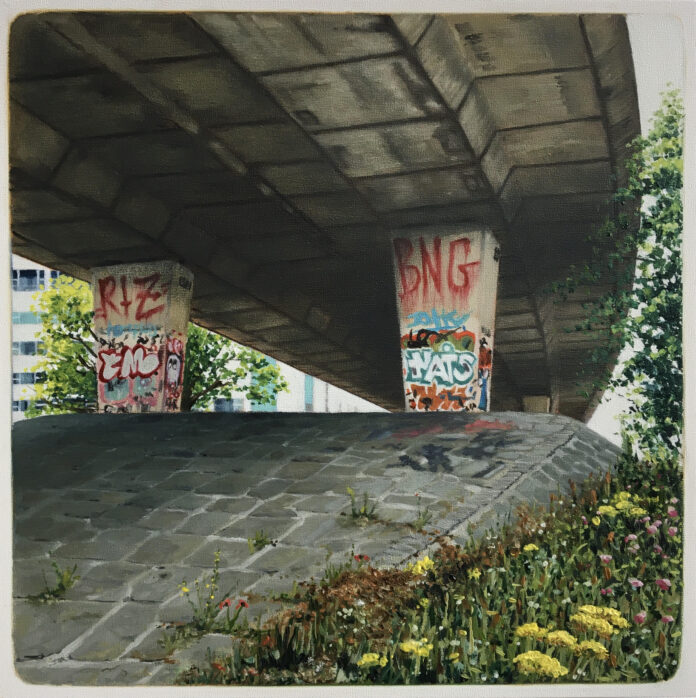 Derided by many and now making a comeback, an exhibition celebrating the architectural style of Brutalism is opening this weekend  at the Saul Hay Gallery in Castlefield

Featuring the works of five artists Mandy Payne, Emma Bennett, William
Brathwaite, Dan Broughton and Jen Orpin, it seeks to celebrate the architectural style that exemplfied much of the mid twentieth century before falling out of fashion in the 1970’s.

Perhap nothing in Manchester exemplifies its style more than the Mancunian Way and artist Mandy Payne who paints directly onto concrete features many scenes hidden from most captured under its concrete pillars.

Ian Hay, Director of The Saul Hay Gallery says: “Manchester is the perfect city to host such an exhibition; with gleaming glass skyscrapers that are changing the skyline forever and where battles between residents, developers and conservationists rage daily, many are urgently asking what makes for good architecture?

“The often maligned Brutalist and Modernist schools sought to solve society’s
ills through architecture. Our exhibition will be a study of what we can learn from these visionaries who designed such buildings which have divided opinion and showcase some incredible artworks encouraging us to take a step back and really evaluate our urban surroundings and our place within them.”

Is Brutalism back? Well Brad Dunning said of its revival:

“Brutalism is the techno music of architecture, stark and menacing. Brutalist buildings are expensive to maintain and difficult to destroy. They can’t be easily remodeled or changed, so they tend to stay the way the architect intended. Maybe the movement has come roaring back into style because permanence is particularly attractive in our chaotic and crumbling world.”