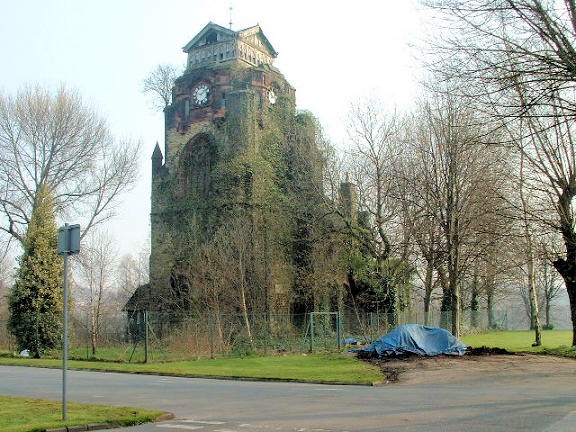 A campaign to save one of Salford’s most endangered historic buildings has been given a boost thanks to a new community group.
The Agecroft Cemetery Chapel Restoration Group has joined forces with Salford City Council to bid for funds to try to secure the future of the derelict chapel at the entrance to the cemetery.
The group hopes to secure around £12,000 for assessment of the building which closed in the 1970s and say they are fully aware of the challenge of bringing it back into community use which could cost up to £1m.
Chair of the group and former Salford resident June Rios helped raise £25,000 for a feasibility study into the future of the chapel back in 2004. Restoration costs were then put at over £750,000 when the former Lantern Group – named after the wooden lantern structure on the building’s tower – began work to try and save it.
June, a self employed beauty therapist of Croft, near Warrington, is now leading the group campaigning to save the chapel which closed in the 1970s.
She says they hope to see it brought back into use and are considering a number of options. If funding can be secured options include potential businesses being involved such as florists, stone masons funeral directors or counselling services, as well community facilities including a cafe and displays on the history, flora and fauna of the cemetery.
June added: “This is a key building which is dear to the hearts of many people in Salford. Its loss would be a major loss and we are committed to finding a positive solution for its future use which will allow us to secure the resources to restore the building. However, we know we are up against a huge challenge as it could easily cost £1m to restore it and bring it back to use. But we have to try.”
Agecroft Cemetery Chapel has been named as one of Britain’s most endangered buildings by the Victorian Society, which campaigns to save both Victorian and Edwardian buildings, and the campaign group Save Britain’s Heritage.

Age-croft Cemetery Chapel was built in 1903 as one of three chapels, serving Roman Catholic, Church of England and non conformist mourners when the cemetery was known as the Northern Cemetery. It served as a chapel for over 80 years before being closed in the 1970s due to the high cost of repairs. It lies at the entrance to Agecroft Cemetery and is part of an attractive group of buildings which is let down by the semi derelict appearance of the chapel.

Up to three fifths of apprentices have lost out in work experience during the...