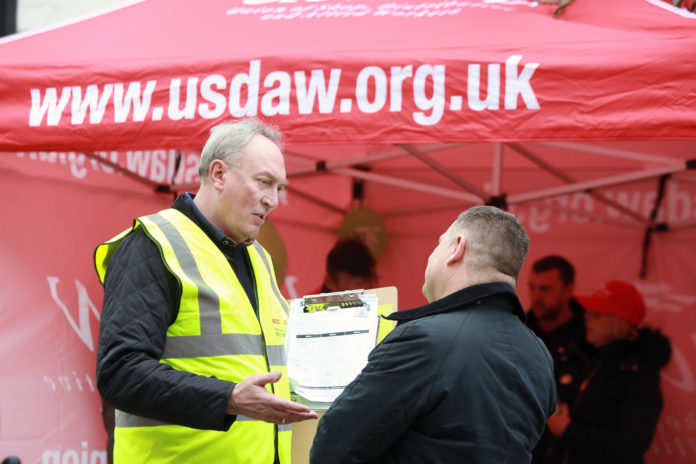 Shopworkers trade union Usdaw will be speaking to shoppers in Manchester as part of a ‘Save our Shops’ campaign day tomorrow.

The union is running an ongoing national campaign to tackle the growing retail crisis on our high streets.

Michael Wheeler – Usdaw Official says:“Shoppers in Manchester are very concerned about the future of their city centre and local high streets. Usdaw’s petition calls for the urgent action needed to save jobs and protect the communities that depend on our high streets with a government-led, clear and coherent strategy for retail. The Government must address the growing crisis on our high streets, as we have called for through our ‘Save our Shops’ campaign.

“The retail industry is experiencing turbulent and challenging times. It directly employs around 3 million across the UK, with many more in distribution and manufacturing reliant on thriving high streets in our towns and cities. Contributing 11% of UK economic output, it is clear that the retail crisis has a huge knock on effect, impacting the UK economy and a significant number of workers.

“The scale of store closures we have seen is devastating, not just for the workforce, but also for our communities and town centres. The Government needs to show that it takes retail jobs seriously by listening to and acting on workers’ concerns.”

Reviewing taxation, commercial rents and business rates to ensure a level playing field between ‘bricks and mortar’ retailers and online retailers, providing a new framework that supports local communities and the wider economy.

A minimum wage of £10 per hour for all workers, secure work and investment in skills and training to provide decent pay and job security for retail workers and drive up productivity.

To give retail workers a say over the future of retail and the introduction of new technology, with a designated inclusive body that ensures the Government recognises the crucial role retail has in the UK economy.

Save or Shops petition: www.usdaw.org.uk/signsos

Every person in Greater Manchester to have access to their own contactable neighbourhood police...