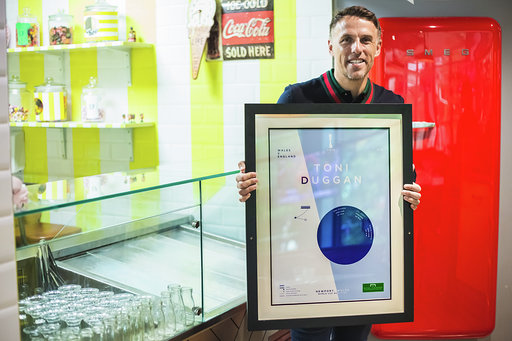 England women’s head coach and Hotel Football co-owner, Philip Neville has unveiled a number of special prints inspired by the Lionesses upcoming 2019 FIFA Women’s World Cup campaign and the qualifying goals that got them there.

The prints by The Goal Hanger will be on display for the duration of the Women’s World Cup until 14th July at Cafe Football Old Trafford, situated on the ground floor of Hotel Football in Manchester, the hotel Philip co-owns with his former Class of 92 teammates Paul Scholes, Ryan Giggs, Gary Neville and Nicky Butt, and Singaporean businessman Peter Lim.

The Goal Hanger is a project run by Richard Horsted who creates infographic prints of iconic goals, and in celebration of the upcoming Women’s World Cup Richard has designed a print for every goal scored by the Lionesses during the qualifying rounds.

Talking about the prints, Philip Neville said: “These prints are a fantastic illustration of our qualifying campaign and I’m proud to have them displayed at Cafe Football in Hotel Football. Not only do they represent the memorable journey myself and the team have been on, but we’re raising money for a fantastic local hospital as all proceeds from the sales of the prints will be going to The Royal Manchester Children’s Hospital.”

Prints include captain Steph Houghton’s powerful goal against Bosnia & Herzegovina and a superb goal from Lucy Bronze against Russia. While Toni Duggan’s print, a finisher against Wales, sent England ahead and on their way to the World Cup in France.

Richard Horsted from The Goal Hanger continued: “The idea was to celebrate the Lionesses during this year’s Women’s World Cup and what better way to do that than by illustrating every moment which got them to France. Every goal during qualifying has been made into a print with each one detailing everything about the goal including the build up, the goal scorer, game information and where the ball ended up in the net.

“Each goal throughout the tournament will also be designed… hopefully all the way to lifting the trophy!”

The prints are priced at £15 for an A3 print and are available to buy via www.thegoalhanger.co.uk. All proceeds go to The Royal Manchester Children’s Hospital.

Cafe Football Old Trafford will be showing the Women’s World Cup on its 13 plasma screens from Friday 7th June until the final on Sunday 7th July. Situated on the ground floor of Hotel Football, Cafe Football is a fun, relaxed dining experience influenced by the spirit of the game. Football fans and foodies alike can appreciate a diverse, well-rounded menu with some subtle nods to the beautiful game.