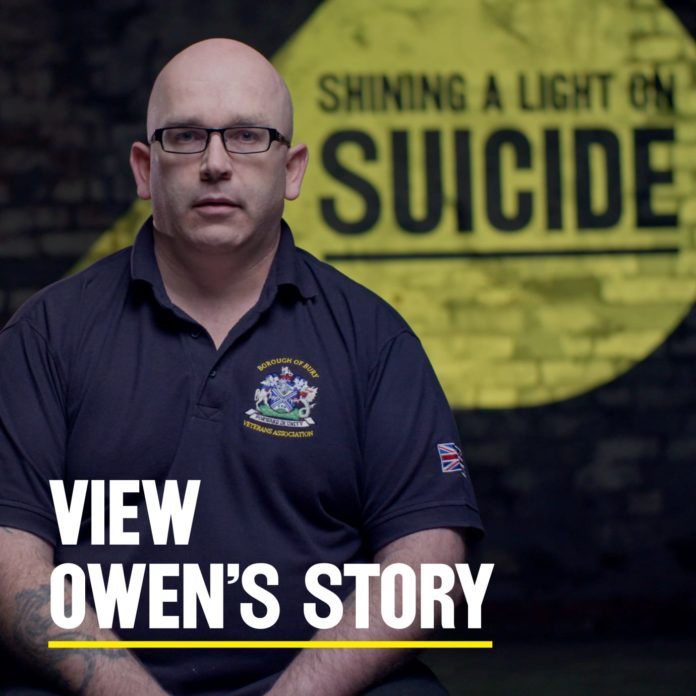 A former soldier from Bury is fronting a major new campaign to get more people talking about and confronting the subject of suicide.

Owen Dykes, 45, who twice came close to taking his own life, has filmed a powerful video for the Shining a Light on Suicide campaign

The father-of-two from Elton found settling back into civilian life extremely tough after a distinguished 24 year army career, which included action in war zones like Bosnia, Northern Ireland, Iraq and Afghanistan.

Having lost colleagues in action, Owen was struggling with a raft of undiagnosed mental health conditions.

And despite having the support of his wife and young daughters, he ‘fell into darkness’ and began to plan his suicide. A family friend recognised he might be suffering and suggested he speak to his GP.

Said Owen: “I remember the GP asking me ‘are you close to suicide?’. I turned to jelly and I told him I was one step away from it. Everything poured out.

“Speaking about it was the best thing I could have done, because from that point things began to improve. I received a proper diagnosis (PTSD, social isolation, survivor’s guilt and depression) and I was referred to the Bury Military Veterans Service for counselling, who have been my literal lifeline.”

Owen is hoping that by coming forward with his story, it will chime with others who are suffering in silence, and those close to people who may be contemplating suicide.

“We can easily look after each other. Not just your family and friends – work colleagues, even people you see once a day. It’s taking the time to ask them how they are doing should you notice something different.”

He added: “You can’t look down on somebody and just tell them to get out of a dark place. You have to be prepared to sit with them, be patient and tell them ‘I’m here to support you, as soon as you want to talk, we’ll talk’. Shine a light into their dark place to give them hope and help them walk out of it.”

The ‘Shining a Light on Suicide’ campaign has been commissioned by Greater Manchester Health and Social Care Partnership to take the sensitive subject of suicide out of the dark and encourage everyone to talk about it in an honest, open and direct way, so no one sees suicide as a solution to their problems.

Suicide is the biggest killer of men under 49, women aged between 20 and 34 and is the leading cause of death in people aged 15 to 29.

Statistics show that many men in particular who have died by suicide did not ask for help or speak to someone before they took their life.

Owen, who works as a traffic planner in Salford, still struggles with flashbacks and nightmares from operational duty. But he is an active runner (see note), often rising at 5am to get the best from the day, and is a hands-on dad for his two girls.

He added: “I would urge anyone struggling with suicidal thoughts to just talk about it. I was suffering in silence and just didn’t know where to turn, but once I told my GP how I was feeling it was a major turning point. I’ve found my place in the world again.”

Also taking part in the Shining a Light on Suicide campaign is retired Bury doctor Falmai Youngman, who had suicidal thoughts after her marriage broke down. She was feeling isolated and lonely, and had planned to take her own life on a Friday if she hadn’t heard from a friend she’d written to.

By chance on the Thursday she received a call to say the letters she’d written to her friend had been going to the wrong address, and he had never received them.

Falmai said: “Looking back it was crackers, my children were 15 and 17. If I’d reached Friday I would have done something that would have ruined their lives and so many other people’s lives.”

Falmai, active in her local community as a member of Bury Rural Inequalities Forum and Village Link, believes suicide is completely misunderstood: “Because people choose not to think about this elephant in the room, it’s become ok not to talk about it,” she said. “It’s not ok, however, because people are dying.

“People are frightened of talking about it, because they think, wrongly, that if you ask the question, you might actually trigger suicidal thoughts and suicide. People don’t understand the psychology of what they should do, so, with best intentions, they do nothing.

“The #shiningalightonsuicide campaign is definitely setting us on the right track. It’s so important to shine a light and to normalise the conversation.”

As part of the campaign, people are being encouraged to take 20 minute suicide prevention training, which provides guidance on how to approach friends, family members and colleagues who could be at risk of suicide.