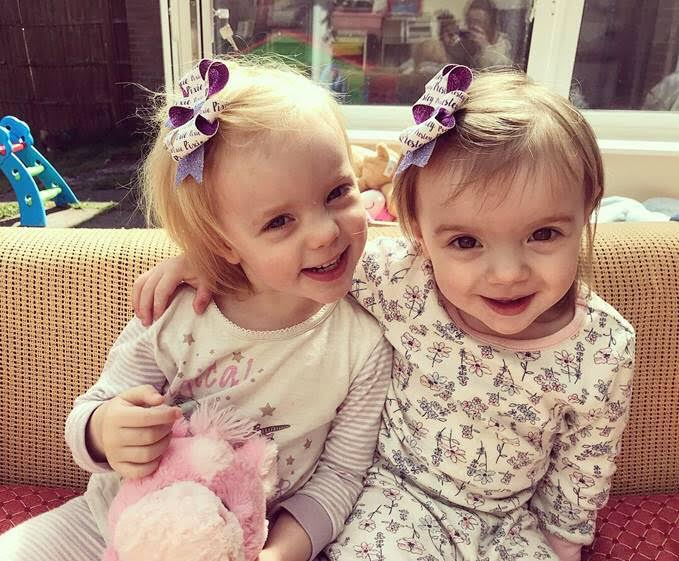 A mother-of-five from Bury, whose youngest twin daughters were both been diagnosed with a rare blood disorder, is trying to encourage more people to sign up as potential stem cell donors.

Both Pixie-Rose and Presley-Pearl Sellars, two, were diagnosed with myelofibrosis and myelodysplasia, a rare blood disorder affecting the bone marrow.

Pixie-Rose was first diagnosed in April 2017 after her mum, Johanna, noticed bruising on her skin. Blood tests and a subsequent bone marrow biopsy revealed Pixie-Rose had grade three myelofibrosis and myelodysplasia, and would need to have a stem cell transplant.

Presley-Pearl, who was tested and found to be a perfect match for Pixie-Rose, was due to donate to her sister. However, Presley-Pearl was then diagnosed with the same blood disorder.

Johanna, 30, who describes the twins as ‘thick as thieves’ and ‘absolutely wild’ said: ‘We really struggled with the idea of Presley-Pearl donating, as she’s just two years old, but we learned to accept it.

‘The last thing we were expecting was that Presley-Pearl would be diagnosed with the same myelofibrosis.’

Johanna says that she is now passionate about raising awareness and encouraging others to sign up to the Anthony Nolan register.

‘We’ve been so fortunate to have been matched with a potential donor, but spending so much time in hospital, we’ve seen a lot of children who don’t have donors.

‘These are children clinging on to life, waiting for someone to step up.’

She added: ‘It’s so important to us to raise awareness and encourage others to sign up.’

Alice Hirst, Regional Register Development Manager for the North West, said: ‘While it’s heartbreaking to hear that both Pixie-Rose and Presley-Pearl will need to have a transplant, it’s great to hear there is a matching donor for them both.

‘Sadly, not everyone can find that potentially lifesaving match, and that’s why it’s so important that people sign up to the Anthony Nolan register – so that children like Pixie-Rose and Presley-Pearl can have a second chance of life.’

Anthony Nolan recruits people aged 16-30 to the stem cell register as research has shown younger people are more likely to be chosen to donate. It also costs £40 to recruit each potential donor to the register, so Anthony Nolan relies on financial support.

To find about more about joining the Anthony Nolan register, or to find out more about the different ways you can support, visitanthonynolan.org/join