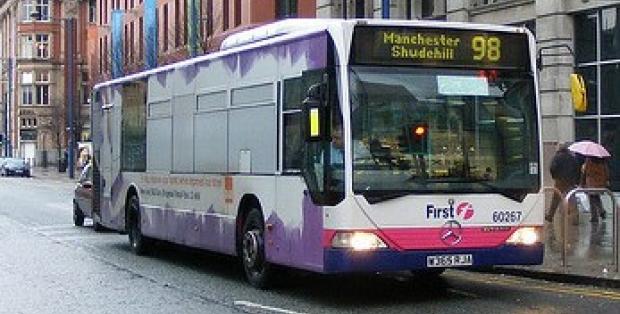 “In 10 years time I want Greater Manchester to have a similar system to London, a fully integrated transport system making it easier to switch from one mode to another.” said the Mayor while adding that “we are some way from being where we want to be”

The move to the London system has begun said the Mayor, throiugh the introduction of the zonal system of ticketing on Metro-link but at the moment it still costs money to move from one mode of transport to another.

The bus network said the Mayor,is a major part of the transport system, responsible for three quarters of all journeys but the bus system is in decline.

With Greater Manchester’s population set to grow to more than three million by 2040, an effective bus network is more important than ever to connect people with jobs, housing, education, healthcare, shops, family and friends.

Instead of a decline in bus use, we want to see millions more journeys, with lower fares and smarter, integrated ticketing.

The new Opportunity Pass for 16 to 18-year-olds is central to this ambition. It is being  brought in to halt a decline in bus use by young people of whom just 26 per cent use the network and stimulate an increase in patronage. Removing barriers to transport will help young people access education, employment, training and socialising which, in turn, supports the future prosperity of Greater Manchester.

The plans form part of the Mayor’s budget proposals. He is responsible for setting the budget for the fire service and other mayoral functions, which local people contribute to through a part of their council tax bills called the mayoral “precept”.

At an additional cost of £9 per year for Band D properties – and just £7 for the Greater Manchester average Band B household,expected to raise around £6.7m , the Mayor believes the contribution will make a huge difference by encouraging the next generation to use public transport.

The Mayor is also exploring other ways of generating revunue including commercial deals, and agreements with the City Region’s nine further education colleges

Contributions towards the fire service and other mayoral costs will be frozen.

Leaders will consider the proposed budget at a meeting of the Greater Manchester Combined Authority on Friday.

The Mayor added: “More than a quarter of young people aged between 16 and 18 use buses as their primary means of transport – but these numbers are declining more quickly than the rest of Greater Manchester’s bus users. We want to reverse this – the Opportunity Pass will encourage more young people than ever before to use the bus.

“Surveys show that the costs of travel can be prohibitive for young people travelling to college, to apprenticeships or training so this pass will help us reduce the numbers of young people not in education, employment or training. This benefits not just young people themselves, but also wider society.

“And by getting young people into the good habit of using the bus, we’re demonstrating to the next generation of workers that the best way to get around Greater Manchester is by public transport, which will ultimately reduce congestion on our roads.”

Asked further about the move to an integrated transport system, The Mayor added that Greater Manchester was the first City Region to be looking at using the Bus regulation Act of 2017 and was looking at either an Enhanced Partnership scheme with the present operators or a franchising option.

He also recognised that there was a North South divide in services across the City and said “that must change” while being pressed on the rail network, he said that one option that is being explored was that similar to Merseyside, the introduction of a GM rail network which could also integrate with Metrolink