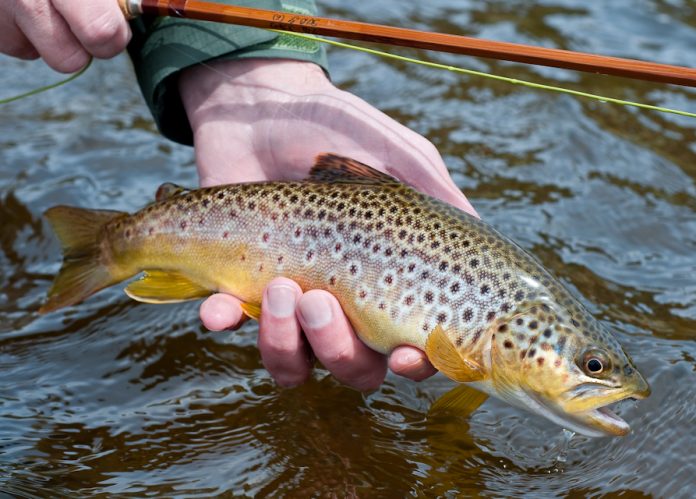 An award-winning scheme which restored a stretch of the River Medlock has been further boosted after juvenile brown trout were found in the watercourse.

Previously known as the Red River, the Medlock underwent a £250,000 transformation at Clayton Vale which re-naturalised the waterway to encourage habitats for wildlife.

Juvenile brown trout, a key indicator species, were found in the river following a fish survey conducted in April 2018.

A large-scale project was undertaken in 2013 along a 300 metre section of the river in Clayton Vale, just upstream of Philips Park and the Etihad Stadium. The aim was to restore the river and re-naturalise it – the brick lining was removed, concrete foundations dug-up and the watercourse widened.

Two weirs were removed in the river which slowed the flow of the water; riffles and runs added to provide protection for fish and insects and deep pools created to help with water quality by reducing sediments.

The increased presence of fish is particularly encouraging as the Environment Agency and Manchester City Council are also installing baffles in the rivers culvert to further help fish move up and down the river.

The River Medlock was originally modified over a hundred years ago by lining the channel with concrete and bricks. This provided essential power and resource for local industry, but damaged natural habitats in the process.

It became known as the Red River as eight million bricks were used to channel the river following the Great Flood of 1872 when the Medlock burst its banks and washed away tombstones and bodies from Philips Park Cemetery.

The project was led by the Environment Agency and supported by Manchester City Council, Groundwork and Irwell Rivers Trust with lots of community engagement.

Finding juvenile brown trout in the Medlock is a massive step forward as it shows we have created suitable spawning habitat in the river. These fish are a key indicator species, which means the overall ecology of the river – good water quality and habitats for fish – have markedly improved.

Our mission at the Environment Agency is to make this a better place for people and wildlife and I’m really proud of our work to bring this river back to life. Further work on the Medlock is planned and I really hope the local community come and enjoy this city oasis.

It’s wonderful to know that our partnership work is paying off and that nature is responding so impressively to the restored habitat along the River Medlock.

This project has benefited both wildlife and local residents by enhancing a fantastic place for nature-lovers, walkers, families and anglers, within just a couple of miles of Manchester city centre.

Noise pollution is hampering birds communicating with each other