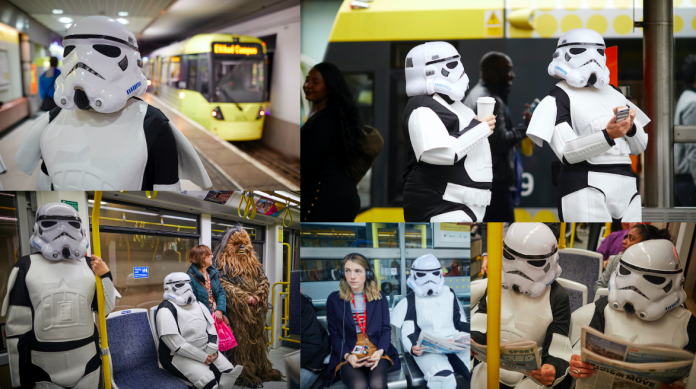 Manchester’s commuters were stunned earlier this week as Star Wars characters ‘stormed’ the subway this week in preparation for East Lancashire Railway’s Sci-Fi on the Sidings event.

The event which takes place this weekly will take you to boldly go where no steam railway has gone before and celebrate your science fiction faves at Sci-Fi on the Sidings on the East Lancashire Railway in Bury!

There is a chance to take in displays and rub shoulders with a host of sci-fi and pop culture characters, including a giant inflatable Stay Puft Marshmallow Man, just 30 minutes away from Manchester City Centre by Train.

Star Wars and Doctor Who attractions have also been confirmed at Bury Bolton Street Station if you want to see a real Tardis or kick back at the Ewok display. Heywood will be home to Jurassic World, featuring a 4m animatronic T-Rex and even a Gyrosphere to sit in on Sunday. For those with royal ambitions, head over to Ramsbottom and claim the legendary Iron Throne, and if bustin’ makes you feel good, visit the giant Stay Puft Man at Rawtenstall.

Rawtenstall will also be hosting a Harry Potter extravaganza, complete with an owl display and, if you’re feeling brave, the flying Ford Anglia and Aragog!

Tickets start from £9 per child and £14.85 per adult, including all of the attractions and activities listed above, as well as unlimited travel on steam and diesel trains. Book online now to beat the queues and save 10% here.

Noel Gallagher to be interviewed at Salford Lads Club Fundraiser

Return of the best-dressed scarecrows in town at Tatton Park