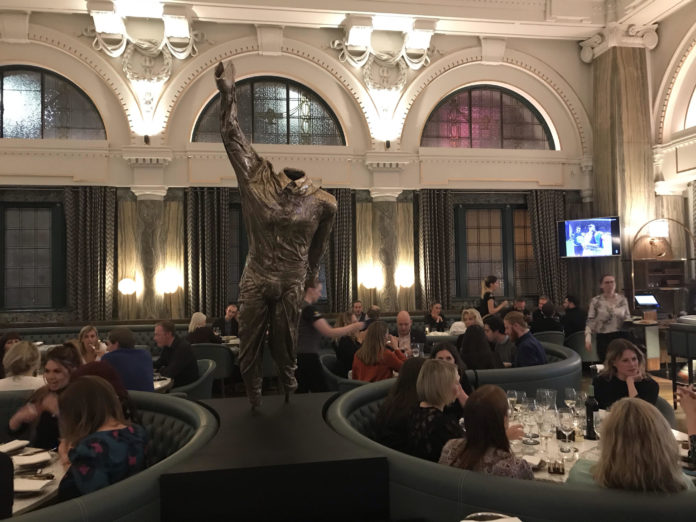 Friday sees the opening of Tom Kerridge’s gastro pub located within the building that once housed Manchester’s Stock Exchange, and in a nod to the once bustling trading floor he has named it the Bull and Bear.

Its doors opened to the press and influencers alike earlier this week and we at About Manchester took a look and sampled the food.

So what to expect? Well everyone is talking about the TV screens, strategically placed around the exquisitely decorated room under the dome of the building-Huge marble topped tables, leather bound chairs and sofas, the centre piece, a headless brass sculpture created by his wife Beth   Cullen Kerridge.

Tom and his Executive Chef Dan Scott have created a menu that is influenced by Tom’s pub in Marlow, The Coach.

The menu is divided into three stages, ‘First’, ‘Second’ and ‘Third’, with the team recommending four to five plates per person, allowing diners to experience a wider selection of the menu.

The, now to be expected open kitchen, means you can, if you so desire, watch the dishes being created.

Some signature favourites from The Coach are making an appearance such as Mushroom “Risotto” Claude Bosi, The Coach Burger with Smoked Brisket and Dill Pickle and Chicken Kiev with Cauliflower Cheese.

But there are also new ideas for Manchester, Rotisserie Beetroot Salad with Feta and Mint, Smoked Chicken and Ham Hock Terrine with Piccalilli and Duck Liver Parfait with Plum Chutney from the first.

Fish Fritter of the Day with Pease Pudding and Tartare Sauce, Crispy Pig’s Head with Celeriac Rémoulade and Spiced Date Sauce and Venison Chilli with Toasted Rice Cream, Red Wine and Chocolate from the second.

Whisky and Rye Pudding, Hot Chocolate Tart with Hazelnut Ice Cream and what appeared the favourite of the night,The Profiteroles with Soured Vanilla Cream.

It’s impossible really to review an opening night, given that an establishment needs a few months to bed in before one can really assess.

The Bull and Bear is fully booked out for the next few months, such being Kerridge’s reputation, but from sampling the dishes, it was difficult to fault the food at the opening.

As for the ambiance, it was Kerridge’s ambition to create an approachable and social space, “blurring the lines between elegance and informality,” as the initial press release said.

Personally I wasn’t sure whether those lines should after all have been drawn.

One criticism was the acoustics, the high ceiling and large open space made it for me, difficult to hear conversation, the screens were muted on the night but with the sound on, one wonders if it would be even more noisy.

There is more to come, The Bank, offering private dining experiences for up to 14 people which comes complete with its own wine cellar and The Vault, catering for private events for up to 120 people.

For the moment then, let’s reserve judgement Fine dining and football, we will see.