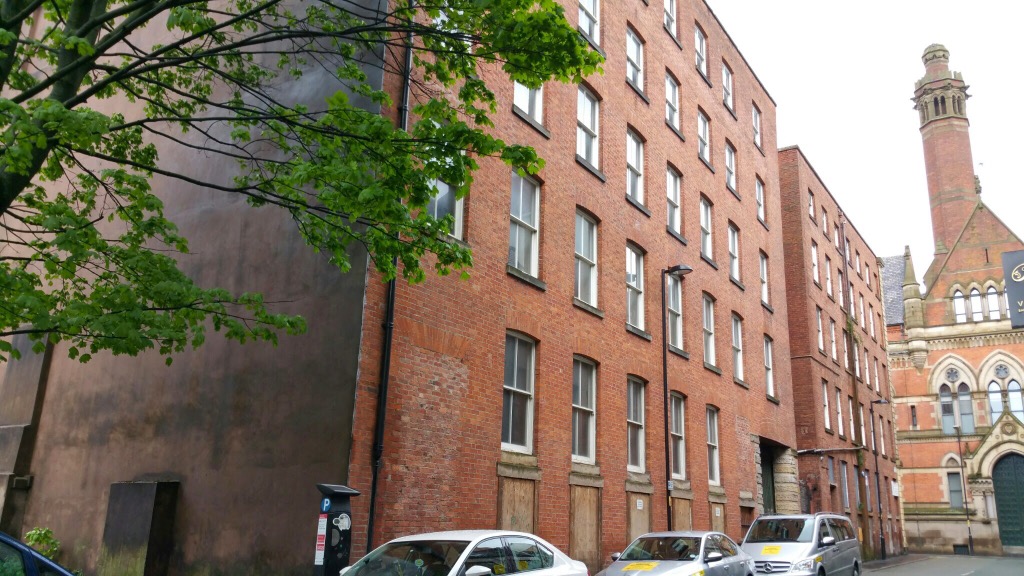 Plans to marry two prominent Manchester city centre listed buildings together, and create a 4,500 sq ft park on top, have been submitted to the council.
Beech Holdings will convert Mindel House and neighbouring 11 Bloom Street – both Victorian brick built former warehouses which have lain empty for a number of years – into 78 carbon neutral apartments.

If plans are granted, a massive piece of street art of the late Tony Wilson and designed by a famous artist, will feature on one side of Mindel House.

Stephen Beech, the owner of Beech Holdings and both buildings, is behind the plans and says the development will become a place ‘where neighbours become friends’.

“This is Beech Holdings’ flagship project,” said Stephen, who is known as ‘Manchester’s Restoration Man’.

“We are marrying Mindel House and 11 Bloom Street together. Mindel House is an old tired office block which has been largely empty for around 10 years – and is in urgent need of repair because it is decaying at an incredible rate. Next door is 11 Bloom Street, which used to house a number of nightclubs, and was badly damaged when the roof caught fire around 10 years ago.”

He added: “After buying the buildings, we got straight to work on plans including the creation of a 4,500 sq ft amenity space on the roof.

“You could call it a roof garden but I call it a small park, due to the sheer size of the space. From this incredible shared amenity space people will be able to enjoy amazing views of city centre skyline, the clock tower and many of Manchester’s most interesting buildings.

“The park will create a community where neighbours will become friends. A large supply of high design external power sockets strategically placed to maximise ease of use will be provided, enabling residents to work and socialise.”

Stephen, the owner of 17 significant buildings in Manchester city centre in addition to another 100 properties in Greater Manchester, said both Mindel House and 11 Bloom Street will become zero carbon and effectively become one.

The large Tony Wilson artwork on the side of Mindel House will add ‘character’ to that specific area of Manchester city centre, according to Stephen.

He said a cobbled alleyway will be created between both buildings at ground level, plus heat recovery systems, air source heat pumps and a communal heating system which will mean cheap running costs for tenants living in these low-carbon apartments.

Stephen also spoke of his desire to continue to save historic buildings.

“When planning is accepted we will convert and ensure the scheme is fully tenanted in around 12 months. I believe this project very much symbolises the future of city centre living.

“It has required an extra level of investment. But it will be worth it as both of these buildings, which have a strong link to Manchester’s heritage, needed to be saved.”

He added: “The demand we are experiencing for city centre living, through our lettings brand Manchester Apartments, is high.

“People will enjoy living at Mindel and Bloom as there’s an efficient use of space, underfloor heating throughout the buildings and no boilers or water tanks in any of the apartments.

“We are truly passionate about saving these historic buildings. For instance, there’s a fabulous staircase within the development, which we will protect and preserve to modern day standards as part of the conversion.

Peel sells half its stake in Media City