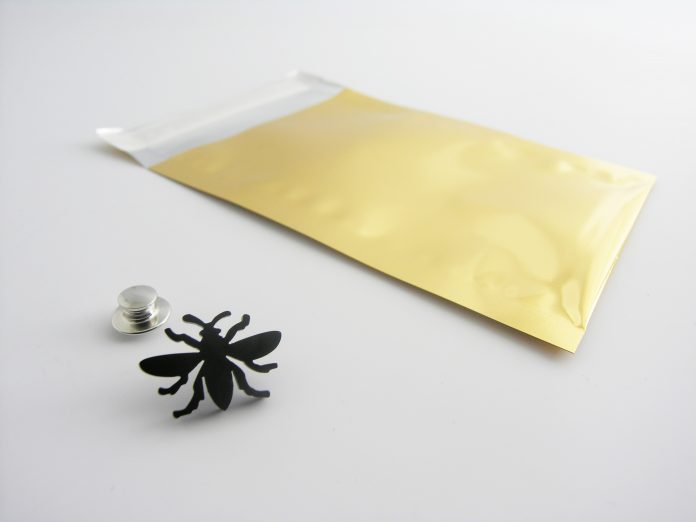 The Great Northern Contemporary Craft Fair (GNCCF) is to facilitate a collaboration between conceptual artist Ted Noten and The Manchester College to produce limited-edition bee brooches to go on sale at this year’s show (12-15 October, Upper Campfield Market, Manchester). Proceeds will be donated to the We Love Manchester Emergency Fund and the Red Cross Hurricane Irma appeal.

Ted Noten is a Dutch conceptual artist who describes himself as a “thought-provoker and maker of sparkly things.” Many of Ted’s works have been collected by museums, including the Metropolitan Museum of Art in New York, the Stedelijk Museum in Amsterdam, the Los Angeles County Museum of Art and the Royal College of Art in London.

Ted has designed an acrylic bee brooch that will be available to buy at this year’s GNCCF which takes place from the 12 – 15 October at Upper Campfield Market.

The Manchester College’s HE Jewellery & Contemporary Design Crafts students have organised the making of the bees as part of a professional practice brief. The limited-edition Ted Noten bee brooch will be available for a minimum donation of £7 exclusively from the GNCCF with all proceeds donated to the We Love Manchester Emergency Fund and the Red Cross Hurricane Irma appeal.

The GNCCF is a not-for-profit event which is supported by Arts Council England through Grant for the Arts, with the aim of championing and promoting contemporary craft and designer-makers in the North. It is the largest event of its kind in the North and features over 150 of the UK’s most talented designer-makers who have been specially selected for their excellence in in interior and fashion textiles, glass, jewellery, ceramics, metalwork, furniture, print-making and more. As well as emerging and established makers, including those who have exhibited at the GNCCF for every one of its ten years, the curated ‘Great Northern Graduates’ will showcase best new Northern design talent to emerge from the UK’s creative courses.

Angela Mann and Ann-Marie Franey founded the GNCCF in 2008 and the event celebrates its tenth edition this year. Angela Mann, said, “Each year the Great Northern Contemporary Craft Fair chooses a charity to support. This year we wanted to offer our support to the victims of the terrorist attack in Manchester but also wanted to look beyond the city and help those affected by Hurricane Irma. The bee brooch, originally designed by Ted Noten for ‘The Sting of Passion’ an exhibition held at Manchester Art Gallery, curated by Curator, Collector and Crafts Council Trustee, Jo Bloxham, was thought to be a perfect fit.”

Ann-Marie Franey added: “As everyone is now aware the bee is the symbol of Manchester and its popularity has soared in the months following the terrorist attack, as people are wearing them as symbols of pride in our city.”

The limited-edition Ted Noten bee brooch will be available for a minimum donation of £7 exclusively from The Great Northern Contemporary Craft Fair at Upper Campfield Market, Off Deansgate from 12-15 October 2017.