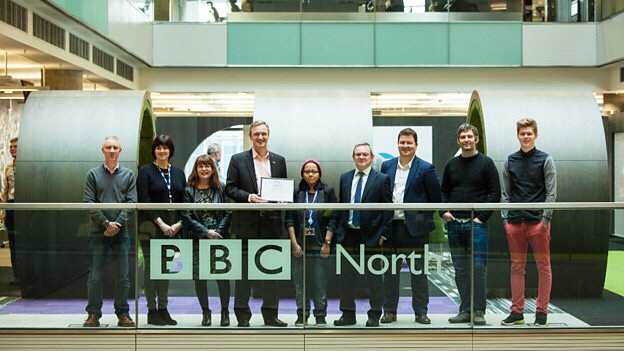 The BBC has become the first UK broadcaster to receive the National Autistic Society’s Autism Access Award.The award was presented to staff at BBC North after it introduced a range of measures to make it easier for people with autism to visit and work at its base in Salford.

Improvements include creating two interactive films – one for children and one for adults – for the BBC Shows and Tours website, which tell visitors to BBC buildings at MediaCityUK what to expect before they arrive, enabling anyone with autism or their carers to plan a tour in advance.

In addition all tour guides, reception staff and security guards have received Autism Awareness Training and a work experience scheme for people with ‘neurodiverse’ conditions has been piloted.

The announcement comes in the week the BBC broadcasts two brand new series exploring the challenges faced by people with autism.

The BBC is committed to ensuring that autism is represented accurately and The National Autistic Society were among those consulted about both productions.

Ian Haythornthwaite, BBC Director of Finance and project sponsor, says: “I am immensely proud of the hard work, dedication and creative thinking which has led to this award. The BBC belongs to everyone so it is right that we are accessible to all, including those with hidden conditions such as autism.

“Our buildings at MediaCityUK are now the benchmark for our industry and we’ll be exploring making similar adjustments across all of our premises.

“This is just one part of the wider work we are doing across the BBC to make sure that we reflect all our audiences both on and off air.”

For Valour’ – Exhibition to honour the Manchester men awarded Victoria Cross on display...