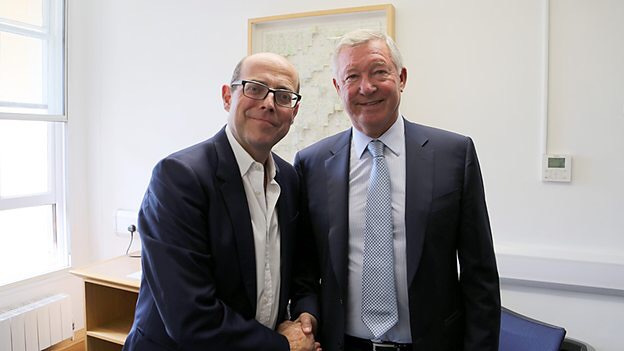 An exclusive documentary from its former political correspondent Nick Robinson will examine the secret of the former Manchester United managers success.

Sir Alex Ferguson wasn’t just the leader of a football team. He was the mastermind of one of Britain’s leading brands. The journey Manchester United Football Club went on to become a huge global force under his leadership is unique in the history of world football.
During this extraordinary encounter, the BBC’s political editor for the past decade, Nick Robinson, who has analysed leaders for a living for many years, will get up close and personal with Sir Alex and uncover the secrets of his success. Sir Alex will share his unique insights on leadership that speak to everyone, revealing how he stayed at the top of his profession for so long and crucially how best to motivate, discipline and inspire people.

Viewers will discover not only how he turned United into a team of champions but how he kept them at the top and what skills he deployed.Sir Alex will also reflect on the nature of legacy and life after leaving the stage with Manchester United, and how, through his relationships with eminent figures outside football and his teaching, his approach to leadership has found resonance beyond the world of football. The programme will feature contributions from leading figures in business, politics, military and religion – as well as the worlds of football and sport.

Sir Alex Ferguson said: “Figuring out what it takes to win trophies with a round ball differs from the challenges facing the leaders of companies like BP, Marks and Spencer, Vodafone or Apple, or the people who run large hospitals, universities or global charities. Yet there are traits that apply to all winners and to organisations whose leaders aspire to win. I look forward to sitting down with Nick and I am confident that this programme will appeal to people in all walks of life.”
Nick Robinson says: “I’ve spent my career watching and analysing leaders for a living but I never saw one to match Sir Alex. Like a general leading troops into battle or the chief executive of a mighty corporation, he succeeded so much and survived for so long because he understood people – how to motivate them, how to discipline them and how to inspire them. I’m look forward to exploring the secrets of Sir Alex’s success not just by talking to him but about him with other leaders in public life, the military and business. My aim is as much to see what he can teach us about leadership off as well as on the pitch.”
Commissioned by Charlotte Moore, Controller of BBC One, with Carl Doran, the executive producer for the BBC. The programme is being made by Juniper for the BBC and executive produced by Samir Shah, CEO of Juniper.
The programme will air on BBC One later this year.