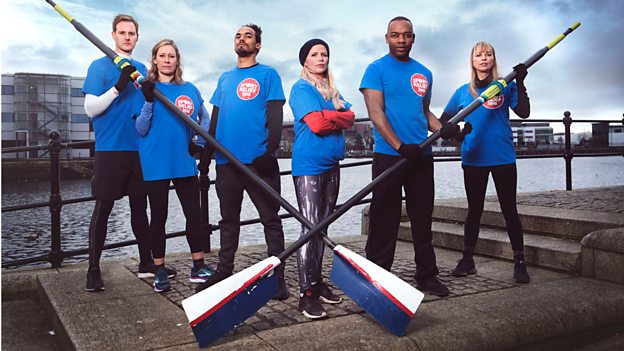 On the high seas of Salford Quays, famous faces from BBC and ITV are set to battle it out in a Clash of the Channels Boat Race for Sport Relief.

The teams get to grips with their oars with the help of some rowing greats. Double Olympic gold-medallist James Cracknell OBE is team captain for the BBC and two-time Olympic champion Helen Glover takes the helm for ITV.

Viewers will see which team is crowned champion of the Clash of the Channels Boat Race: BBC vs ITV when it airs on BBC One on Friday 23 March as part of Sport Relief, which this year is preceded by a week of activity from 17-23 March.

The brave crew members have been training for the past eight weeks – applying the expert advice passed on by Sir Steve Redgrave and their team captains.

Sir Steve says: “Training for such a synchronised team sport like rowing is going to be a huge challenge for all of them. They’ll need explosive energy, stamina and a great sense of timing, so anything could happen!

“Both teams have got world-class captains to lead them to the finish line. It’s going to be a fantastic effort with some good old-fashioned rivalry thrown in. I can’t wait to see who wins.”