This summer, I was lucky enough to go and watch the first ever Major League Baseball game played outside North America, at the Olympic Stadium in London. (Yes, I know technically it’s called the London Stadium now, but it will always be the Olympic Stadium to me.).

It happened to coincide with the hottest day in England since the dawn of time, so when I met up with my friends we spent most of the afternoon looking for shade to avoid melting in the sun. Don’t worry, I said, by the time we go to the stadium in the evening we’ll be under the roof, so we’ll be incredibly unlucky to be sat right in the sun.

With the aid of sunglasses and a Boston Red Sox cap I was able to watch the action and once the sun went down, I could even take a decent photo.

Now, I’ll be the first to admit that I don’t know much about baseball, but it’s a funny old game isn’t it? The obvious sport to compare it to is cricket, but I feel cricket has so much more nuance. Baseball seems to be a very simple game. The fielders always stand in the same position. In cricket, the combinations are almost infinite as this illustration shows: 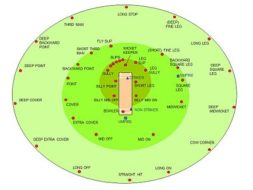 One of the beautiful things about cricket is a quirky looking field. It could be one where all the fielders are within 10 yards of the batsman, or everyone is on the offside, leaving a huge gaping space on the legside. I can’t see that happening in baseball.

And then they have those huge mitts to catch the ball with. Only one fielder in cricket has gloves, in baseball they all have them. If someone skies a hit anywhere near a fielder, he’s not gonna drop it with one of those massive gloves. In cricket, they should take those catches, but sometimes they don’t.

There’s an element of jeopardy, which makes it more exciting. You never know quite what’s going to happen next in a game of cricket. Baseball seems too predictable most of the time. At the end, the Yankees had won as expected, although it was hard to tell if anyone was really that bothered. It was a fun night with friends, and it was great to be part of a new experience in England. Would I go again, though? Probably not. And the Cricket World Cup Final which took place only a few weeks later confirmed which is the sport for me.

I understand why some people think cricket is boring. It can be. But so can any sport. The thing about cricket is there are so many intricacies to it that, as a spectator, you are always learning. And even when you think a game is settled, a couple of quick wickets can change everything.

Unfortunately, I wasn’t able to get a ticket for the final. In fact, I wasn’t even in the country when it took place. I’m very careful with my calendar, I try to sync all the important sports calendars to my Gmail calendar so as not to book anything else in when there’s a big game. So, of course, I had all of England’s cricket world cup fixtures in and I wasn’t going to miss a single one. A trip to France to see the family? Sounds lovely, let me just check, nope, no games on that week. I’ll book my flights now.

But this was back in April. Before the World Cup started. Before we knew England would be in the final. So, it wasn’t in my calendar. Do the French even know what cricket is?

Kinda, but not really is the answer to that. Fortunately, thanks to Sky sharing the rights with Channel 4, and a very old Sky box which looked like it shouldn’t work at all, I was able to watch the game with my dad. And what a game it was. I could try to explain what happened here but, frankly, I’m still working it out myself.

In short, England showed some remarkable moments of skill, as well as having some incredible slices of good fortune which, if I were to put into a novel, I would be derided for being completely ridiculous. But sometimes the truth is stranger than fiction. This video is a beautiful short summary of the end although it is far from the full story. And as it turned out, watching the game in France rather than in the pub in England was so much better. To be able to share the experience with my dad and hug him at the end was almost as good as being at Lords. Almost.