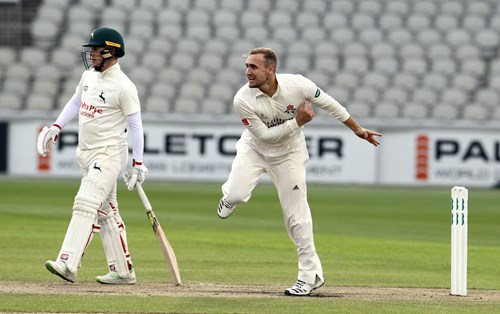 “It has been a funny game,” said Lancashire skipper Liam Livingstone after the Red Rose lost their first game in the County Championship to Notts on a day when twelve wickets fell in fifteen over 90 minutes for just twenty .

“At times the pitch has looked unplayable and at times it has looked pretty good.

“As a team, when you lose two wickets you have to graft and do what you can to make sure you don’t lose three, four or five wickets. We didn’t do that this morning.”

Lancashire resumed their second innings on 58-2, just 6 runs behind but the collapse that followed was astonishing as Nottinghamshire pair Harry Gurney and Jake Ball ran through the remaining batting, taking a combined 8-15 in 62 balls as the ball nipped around, to skittle the Red Rose for 73 and leave a victory target of just 10 runs.

Amazingly Notts lost four wickets in scoring the required runs with Joe Mennie taking 3-4, to end up with six wickets in the match, before the visitors could finally claim a six-wicket victory.