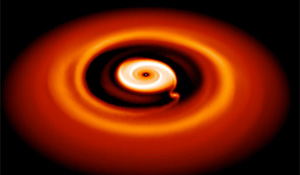 New research into the early stages of planet formation, published today in the Monthly Notices of the Royal Astronomical Society, suggests that there may be more giant planets ,most at least 10 times as big as Jupiter, orbiting at large distances from their host star than we previously thought.

Using supercomputers, researchers at the University of Central Lancashire (UCLan) and Nagoya University in Japan have analysed how young planets interact with their host protoplanetary disc ,the rotating disc of dense gas and dust, from which planetary systems, like our own Solar System, form.

They have discovered that the early evolution of giant planets is far more diverse than expected.

As giant planets form, they take gas from their protoplanetary discs over a few millions of years in order to grow. Research has previously focused on how, as they grew, these planets moved inwards towards their parent star, often getting destroyed by it in the process.

Using computer simulations performed with the UCLan High Performance Computing (HPC) facility and the UK DiRAC supercomputer facility, researchers have now discovered that when there are strong interactions with a heavy protoplanetary disc, the growing giant planet is likely to be dragged away from its parent star, while milder interactions with a less heavy, stable disc drag the planet towards its star.

Although some of the inward-migrating planets were likely to get shattered by gravitational interactions with the disc and the host star, in both types of interactions, the growing planets may survive to reach adulthood.

“A planet’s survival is also difficult to predict. Many planets that formed initially may be destroyed, and only a few can survive to reach adulthood. This newly discovered insight into the diversity of how young giant planets evolve can help us to understand more about the formation of solar systems beyond our own.”

Britannia chain of hotels voted the worst in the country