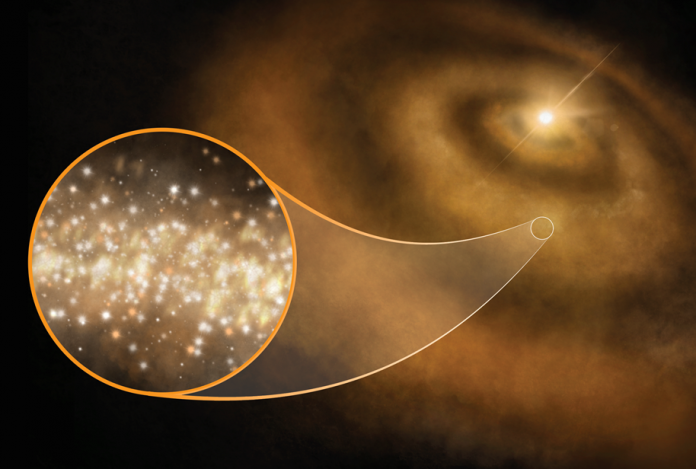 An international team of astronomers including the University of Manchester, have detected some of the tiniest diamonds in the universe swirling around three infant star systems in the Milky Way.

Known as nanodiamonds they are bits of crystalline carbon hundreds of thousands of times smaller than a grain of sand. The research was published in Nature Astronomy.

These microscopic gemstones are neither rare nor precious, but they are an exciting discovery for an astronomer explains one of the paper’s co-authors, Professor Anna Scaife from The University of Manchester’s School of Physics and Astronomy

“For decades we have puzzled over the exact source of a peculiar type of faint microwave light emanating from a number of regions across the Milky Way. Known as anomalous microwave emission (AME), this light is thought to come from energy released by rapidly spinning nanoparticles.“

Lead author, Dr Jane Greaves, an astronomer at Cardiff University, added: “Though we knew that some type of particle is responsible for this microwave light, its precise source has been a puzzle since it was first detected nearly 20 years ago.”

Prior to this research the most likely culprit was a class of organic molecules known as polycyclic aromatic hydrocarbons (PAHs). These are carbon-based molecules found throughout interstellar space and recognized by the distinct, yet faint infrared (IR) light they emit.

But the astronomers found that hydrogenated nanodiamonds, which form naturally within protoplanetary disks and are found in meteorites on Earth, are the most likely source of AME light in our galaxy.

The team used the Green Bank Telescope (GBT) in America and Australia Telescope Compact Array (ATCA) to survey 14 young stars across the Milky Way for hints of AME.

AME was clearly seen in three of the 14 stars, which are also the only three stars of the 14 that show the IR spectral signature of hydrogenated nanodiamonds. Nanodiamonds likely form out of a superheated vapor of carbon atoms in highly energized star-forming regions. This is not unlike industrial methods of creating nanodiamonds on Earth.

In astronomy, nanodiamonds are special because their structure produces what is known as a “dipole moment” – an arrangement of atoms that allows them to emit electromagnetic radiation when they spin. Because these particles are so small – smaller than normal dust particles in a protoplanetary disk – they are able to spin exceptionally fast, emitting radiation in the microwave range rather than in the meter-wavelength range, where galactic and intergalactic radiation would probably drown it out.

Dr Greaves added: “This is a cool and unexpected resolution to the puzzle of anomalous microwave radiation. It’s even more interesting that it was obtained by looking at protoplanetary disks, shedding light on the chemical features of early solar systems, including our own.”

“It is an exciting result,” concluded Prof Scaife. “It’s not often you find yourself putting new words to famous tunes, but ‘AME in the Sky with Diamonds’ seems a thoughtful way of summarizing our research.”