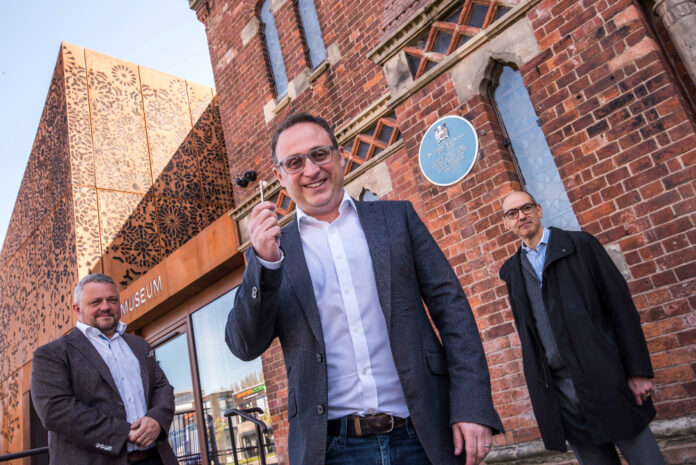 The keys for the brand new Manchester Jewish Musuem are now in the firm posession of Chief Executive Max Dunbar and staff as the builders at H.H. Smith & Sons have now officially handed over the building.

This marks another exciting milestone and the start of the final countdown with just over 60 days until the museum finally reopens to the public on Friday 2 July after its two year closure.

A large team of specialist organisations and contractors (including architects, structural engineers, exhibition designers, conservation consultants, historic painters and stained glass window restoration experts) have been involved in the extensive restoration and extension of this major capital development funded in part by a £3m grant from The National Lottery Heritage Fund.

Chief Executive Max Dunbar comments: “We started work on this project over eight years ago. After all this time, to finally receive the keys to our stunning new building is incredibly exciting and slightly overwhelming. We have to say a huge thank you to the funders and the many contractors, suppliers, designers, specialists and experts who have played such an integral part in our redevelopment and of course our incredible team of staff, volunteers and trustees. Reaching this major milestone has been no mean feat, especially in the middle of a global pandemic. But the challenges and stresses make the final results all the more rewarding, a true labour of love. We cannot wait to share it with everyone this summer.”

Manchester Jewish Museum’s Curator, Alex Cropper, is one of the key members of staff putting finishing touches to the installation and new museum. Amongst one of her final jobs ahead of opening is meeting and interviewing past congregants of the museum’s Spanish and Portuguese synagogue which was built in 1874 and ceased operating as a working synagogue in the 1980s. Alex will be capturing oral histories and memories to add to the museum’s collection of over 500 oral histories that reveal stories of Jewish Manchester. A selection of these will feature in the museum’s new exhibition exploring the universal themes of journeys, communities and identities.

In her role as the museum’s Curator, Alex manages a collection of over 31,000 items – 300 of which will be going on display in the museum’s new world-class gallery, many for the first time. The oldest items relate to the families who were amongst the first people to settle in Manchester in the 1780s. Some of the oldest objects Alex is currently handling is an original daguerreotype (a photo on a metal plate) of Elias Nathan whose Dad, Jacob, was one of the founders of Manchester’s Jewish community in the 18th Century. Alex is working with conservators and specialist mount-makers in the run up to opening to bring the museum’s extensive collection to life, allowing visitors to connect with and share the diverse stories of Jewish Manchester.

Alex comments: “I feel equal amounts of excitement, nerves and responsibility as we are now in the building and as the opening draws closer. Bringing together so many objects, oral histories and testimonies to create our brand new gallery has been daunting, exhilarating and a huge privilege. It has been fascinating to explore how the synagogue and the community first came to life and what both have brought to the city as a whole. I cannot wait to open our doors to the public and share our stories, and our magnificently restored synagogue so people can hear and see first-hand how the stories and contributions of one culture are universal and relatable.”

Laure’s immersive installation will transform The Ladies’ Gallery in the museum’s historic synagogue and will include a new film shot inside the museum and in the surrounding Cheetham Hill area. Laure Prouvost has explored the museum’s extensive collection to discover the stories behind past congregants of the synagogue, unearthing the long-lost voices of the women who once found comfort and community within its walls.

Manchester Jewish Museum will open seven days a week to the public from Friday 2nd July.

Tickets will go on sale for general admission and for The long waited, weighted gathering, co-commissioned by Manchester Jewish Museum and Manchester International Festival on 20th May at. www.manchesterjewishmuseum.com