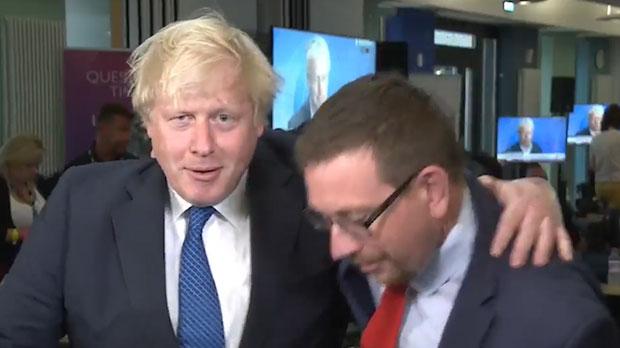 Local MP and Labour’s General Election coordinator Andrew Gwynne may well have been part of the best action in this somewhat uninspiring campaign to date.

The MP for Denton and Reddish crashed a live interview the Foreign Secretary Boris Johnson was giving on Sky News last night appearing onscreen and asking him why he had not agreed to go head-to-head with him.

Mr Johnson responded: ‘Come on then you big girl’s blouse.’

It all happened ahead of leaders’ BBC Question Time yesterday in York.

Gwynne shouted: ‘Long time no see. Why wouldn’t you go head to head with me today, Boris?’ who responded: ‘I’m being heckled by some Labour MP whose name… Andrew Gwynne.”

As the pair cajoled each other, Johnson put his arm around the Labour MP but then he challenged Gwynne over immigration figures, he appeared to push him, with Andrew Gwynne lurching forward responding by saying ‘Don’t be a pillock.’

The confrontation lit up social media, the clip being heavily shared since.