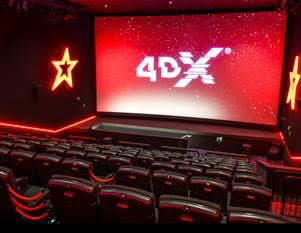 Cinema chain Cineworld has announced it will open a new 4DX auditorium at Cineworld Ashton-under-Lyne.

The auditorium will be ready to stimulate all five senses on Wednesday 28th August.

Exclusive to Cineworld in the UK, 4DX offers customers the opportunity to experience extreme sensory cinema. With stimulating effects like water, wind, scent and strobe lighting that are timed to enhance what’s happening on screen and high-tech motion seats, engineered to move, vibrate and shake in perfect synchronicity with the action on screen, 4DX is Cineworld’s most exhilarating way to watch a film.

Available in both 2D and 3D formats, 4DX is considered to be one of the biggest innovations in cinematic technology. The new 4DX auditorium will house 140 specially designed seats, plus a curved screen bigger than a double decker bus. 4DX at Cineworld Ashton-under-Lyne will be Cineworld’s 25th 4DX auditorium and second in Greater Manchester.

Guests will be able to experience 4DX extreme cinema in new and upcoming films Angel Has Fallen, IT Chapter Two and Ad Astra.

In addition to the opening of the brand-new 4DX auditorium, Ashton-under-Lyne’s whole cinema has also undergone a full cinema refurbishment, with the Starbucks to be completed by the end of September.

Francis Lamb, Cineworld Ashton-under-Lyne General Manager, said: “We’re thrilled to introduce cinema goers to our new 4DX auditorium. There’s nothing like it and it can only be experienced at Cineworld, in the UK. We’re opening with a fantastic line-up of movies perfect for 4DX including Angel Has Fallen, IT Chapter Two and Ad Astra. We can’t wait to see customers’ reactions when they try out the extreme, multi-sensory cinema experience!”