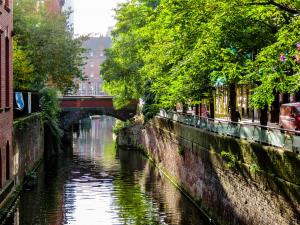 Manchester is planning to bring forward its ambition to become a zero carbon city by twelve years, with a revised target of 2038, believed to be the first UK local authority to make such a commitment.

The new target, which has been proposed by the city’s Climate Change Board, is in line with research carried out by the world-renowned Tyndall Centre for Climate Change.

Recommendations produced by the Tyndall Centre, based at the University of Manchester, include a set of actions and a proposed definition of ‘zero carbon’.  Under the plan, Manchester will adopt a science-based ‘carbon budget’, capping total emissions at 15 million tonnes from 2018 – 2100.

The city will also commit to a 13 per cent year-on-year reduction in emissions from 2018 onwards – becoming zero carbon by 2038, well in advance of the previous commitment to achieve this goal by 2050.

The report, which follows recent international reports stressing the importance of making rapid reductions in global carbon emissions, outlines that all of the city’s sectors will need to greatly reduce their carbon emissions, if the target is to be met.

The Manchester Climate Change Board will now develop a draft action plan by March 2019, ahead of producing a final plan by 2020, detailing how the city can stay within its carbon budget.

Executive Member for the Environment, Planning and Transport, Councillor Angeliki Stogia, said: “The new target for Manchester to be a zero carbon city by 2038 is challenging, but it is clear that going further is necessary if we are to play our full part in limiting the future impacts of climate change.

“A zero carbon city will have many benefits for our citizens, not least enhanced air quality, better public transport networks, lower energy bills and future job opportunities in the growing low-carbon energy sector.

“However, the council cannot do this on its own.  We will all need to play our part in reducing Manchester’s carbon emissions – and will all share in the benefits of a healthier city when our goal is met.”