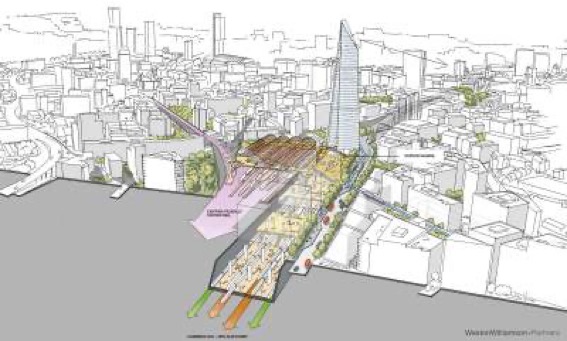 New plans for HS2 have been submitted to a government-backed review that envisage running services through a tunnel under Manchester before crossing the Pennines to Bradford, Leeds, York and Newcastle.

The plans drawn up by Architects Weston Williamson + Partners, together with engineering consultants Expedition would combine the current for HS2 with the proposed Northern Powerhouse Rail project, which is designed to improve intercity connections across the Pennines.

The proposal would allow direct high speed train services from Birmingham, Liverpool and Glasgow to Leeds via Manchester Piccadilly greatly improving connection across the north.

Direct HS2 services between London and Leeds would also become possible via Manchester. This would have the option of deferring the Phase 2b branch between Birmingham and Leeds and so save several billion pounds.

A new station could also be built close to junction 20 of the M62 to serve Rochdale and Oldham, regenerating the towns.

The current plans by HS2’ is for a new high-speed terminus station on the east side of the existing Network Rail station, approached via a new high-speed tunnel into the city centre from Manchester Airport. Although the new HS2 line would approach the proposed terminus below ground, the terminus itself would be above ground level.

If the new HS2 and NPR platforms at Manchester Piccadilly station are built as terminus platforms as planned, future generation of Mancunians will continue to suffer the cross-city rail connectivity problems that the city inherited as a legacy of un-coordinated railway planning in the 19thcentury.

The existing scheme, they say, has the disadvantage of significantly slowing down journeys across Manchester, and substantially reducing the capacity on the new station platforms.

the heart of this is a new pedestrianised square, acting as a spacious forecourt to both the new high-speed station and the existing Network Rail station, and providing a focus for regeneration around Store Street, Chapeltown Street and the Ashton canal.

With the new platforms and concourses of the station built below ground, the ground level is kept free for public realm and new buildings for commercial and civic use.

Above the station new opportunities for commercial development are created, delivering a new business district within the city centre. Below the station extensive arches space can be repurposed as retail arcades accessed from the Station Square.

By keeping the trains and the station below ground rather than on a viaduct, urban severance to the east of the station is avoided. The Square itself is directly linked to the surrounding streets creating a new focus for regeneration to the north, enhancing wider connectivity.

State of the Art MRI scanner lifted into City Labs

Busiest summer yet forecast for foodbanks