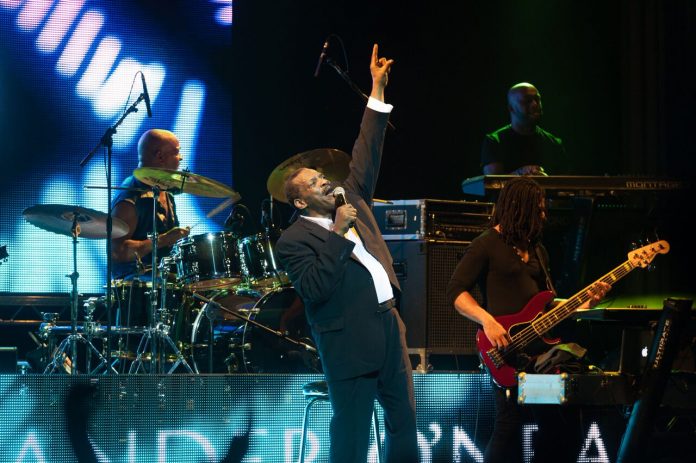 Music legend Alexander O’Neal will headline Mike Sweeney’s Children In Need Extravaganza which will broadcast live from The Lowry Theatre on Monday 27 November.

The R&B and soul singer, who has a music career which spans more than 30 years, will be performing two songs during the live show on the Quay Stage which runs from 9am -12noon.

Alexander O’Neal, who has numerous hit albums to his name and fans worldwide, will be accompanied by a stripped-back band. As well as the American soul singer, other acts confirmed for the Extravaganza include local artists Alice Gasson, Liam McClair, Chloe Jones, Claire Mooney, Molly Corcoron, Jess Kemp, Mica Miller and Rowetta from the Happy Mondays, who is a keen supporter from last year’s show.

The music stars will also be joined on stage by musician and writer Buzz Hawkins and presenters Ted Robbins, Eamonn O’Neal and Jimmy Wagg, plus Roger Johnson from BBC North West Tonight. Comedian Janice Connolly, who plays ordinary housewife extraordinaire Mrs Barbara Nice, will also be entertaining the audience in her own unique style.

Alexander O’Neal commented: “I am so excited to be part of Mike Sweeney’s Extravaganza and performing one of my most well known hits, Criticise. The Lowry is a great venue with a fantastic atmosphere and It’s a real pleasure and an honour to be helping to raise money for a cause like BBC Children In Need.”

BBC Radio Manchester’s Mike Sweeney said: “This is the second year we’re putting on this Extravaganza and I couldn’t be more excited. We have some brilliant local acts providing the music, as well as a few famous faces from the North West dropping in to say hello.

“Last year we raised over £2000 in aid of Children In Need and hope to do the same again this year. It will be a great day out, full of fun, but I won’t lie I feel a little out of my comfort zone at the thought of being live in front of an audience of 450 of our listeners.

“I am really looking forward to the incredible Alexander O’Neal headlining the show. As with all of the performers, we are lucky that somebody of his stature is willing to give his time for free to support such a good cause.”

Tickets for the Extravaganza are £10, £5 from each ticket sold will be going to BBC Children In Need.