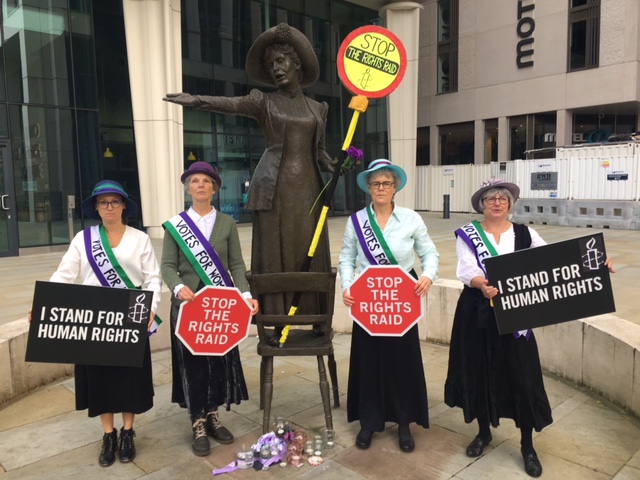 Human rights activists gathered by the Emmeline Pankhurst Statue in St Peter’s Square in the centre of Manchester over the weekend to protest aboutconcerns over a raft of new Government measures which could reverse hard-won rights in the UK.

Some dressed as suffragettes in memory of how they fought for their rights over a century ago, with placards calling on the government to ‘Stop the Rights Raid’.

The protest was part of an intensive nationwide week of action (10-17 October), with activists from Amnesty International UK – as well as Liberty, Stonewall, Freedom from Torture, the British Institute for Human Rights and others – meeting MPs to urgently raise their human rights concerns.

Members of the Manchester Group of Amnesty International are due to have online meetings with Jeff Smith MP and Lucy Powell MP at the end of the week to discuss concerns over a raft of new Government measures which could reverse hard-won rights in the country.

Dubbing proposed new measures from the Government a “raid on rights” they are urging our MPs to oppose the moves in Parliament and to use their influence to seek amendments or otherwise reduce the impact of the regressive measures.

In particular, they are concerned about the impact of two controversial bills currently going through Parliament, as well as moves to dilute the Human Rights Act.

The two bills are:

*The Police, Sentencing, Crimes and Courts Bill, which would place new restrictions on the right to peaceful protest and potentially entrench racism in policing;

*The Nationality and Borders Bill, which would reduce the right of people to seek asylum in the UK.

The Government has also recently signalled that it is likely to amend or even replace the Human Rights Act, which campaigners say underpins and helps guarantee many basic rights and freedoms for people in the UK. Amnesty and others have hailed the act as being vital in landmark justice campaigns, including Hillsborough, the Mid Staffs hospital scandal and tackling modern-day slavery.

Hazel Errey, the Chair of the Manchester group of Amnesty International said:

“It took ordinary people a very long time to win these rights and we must not let them be taken away with the stroke of a pen.

“Justice, fairness, offering a place of safety and the right to peacefully protest have always been key features of British society. All of them are under threat as never before.

“We are calling on all MPs to oppose this raid on rights and stand up for the values this country is famous for.”